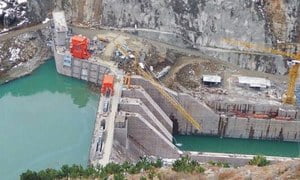 Contrary to the official media campaign that the Nandipur power project is ‘actually providing’ a sustained generation of 430MW against its installed capacity of 425MW, the plant remained closed for the past five days for paucity of treated oil.

A spokesman for the water and power ministry insisted that the plant had been shut down on “merit order”, and not for any technical or emergency reasons. The electricity produced by Nandipur project costs Rs11.30 per unit.

“When other cheaper plants are available why should we run it,” he said. It was not the only plant that had been shut down, he said, adding that there were a number of other plants which had been closed down due to commercial and financial reasons.

But insiders said the plant had to be shut down because of low supply of treated fuel.

“As we all know, the furnace oil treatment plant (FOTP) was only 70 per cent of the plant capacity,” said an NTDC official.

The FOTP runs for 19 days and treats oil for seven days running of the plant. This is a manufacturing fault which the government tried to cover up through exaggerated claims of sustained generation, but it only ended up brining the plant under media scrutiny.

Otherwise, he claimed, the plant had to go offline for three days after every seven days if it had to generate 425MW. No one could do anything about it.

“The FOTP problem would not go away any time soon because of certain reasons,” said a former head of the Pakistan Electric Power Company (Pepco).

The plant design was outsourced in the first place and the manufacturer delivered the plant as per design and order. Now the plant needs bigger FOTP, but there is no money.

After the government declared financial close, the contractor left and the plant is now being run by a third party.

Who will now pay for the bigger capacity FOTP, and how? “This is what now afflicts the power project and it continues nagging the plant and production till the government finds some way out,” he explained.

“One of the three units went off on Nov 22, others followed on 23rd and 24th and the entire plant was completely shut for the next three days. On Friday evening, it started coming back and by late evening it was producing 20-odd megawatts. Hopefully, it would come back completely in the next two days and produce full capacity for the next week or so before either reducing generation or shutting down for another three days. This is the reality of the plant, regardless of official campaigns and claims,” he said.

The power ministry’s spokesman said neither did the government claim that the plant would never close down nor that its generation won’t fall. He pointed out that the federal minister had in his press conference said that the plant’s production would fluctuate according to the national requirement and that’s what was happening.