Pakistan contains Asia’s most spectacular landscapes as it stretches from Arabian Sea, its southern border, to the world’s magnificent mountain ranges in the north. There are also some ancient sites rivaling to those of Egypt and Mesopotamia. Pakistan is part of south Asia bordering the Arabian Sea, between India in the east, Iran and Afghanistan on the west and China in the north. Pakistan stretches from 61 – 78 N and 23.6 – 38 E, like a rectangular mass extending northeast to southeast over an area of 796,096 sq. kms. Pakistan has varied terrain with flat Indus plains, containing Deserts in the east; mountains in the north and northwest; Balochistan Plateau in the west. The surface elevation ranges from 0m, the Arabian Sea, to 8,611m, the world’s second highest mountain K2 (Mount Godwin-Austin). The total arable land is estimated to be approximately 27.87% with permanent crop cover of 0.87% and others at 71.26%. Of country’s total area 24% is cultivated, of which 80% is irrigated. Forests and grazing land cover is 4%, about 31% is not fit for agriculture use and about 2% is under cover. 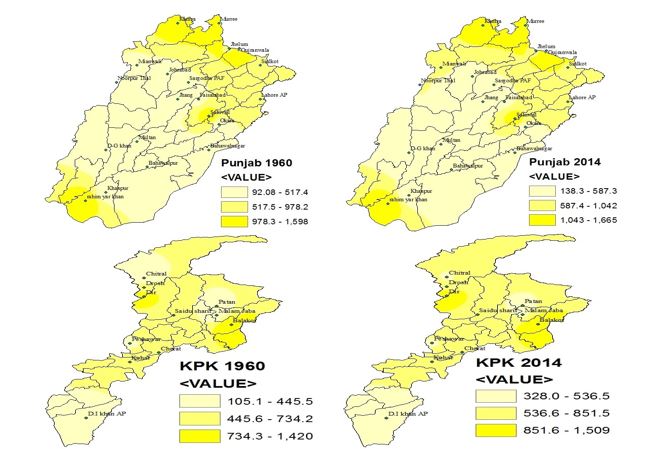 48 stations with available long term data from 1961-2014 and 5 stations having data range from 1964-2014 were used to study all Pakistan rainfall. A study on the precipitation of Pakistan from 1961 – 2014 has been made by (Chaudhry, Q. Z,). An increasing trend was observed for the annual average rainfall over Pakistan as shown in figure, for the period used in this report i.e. 1961 – 2014. A total change of about 61 mm was observed for the analysis period. The 10 years moving average showed that rainfall decreased from early 1970s till 2014, the rainfall gradually decreased from 600mm average to less than 400 mm a year. Since the 1970s the net trend of precipitation is increasing to a total change of 133 mm. The analysis of precipitation was further resolved to provincial basis.

The above figure depicts the time series of summer monsoon rainfall. There is an increase of 22.6 mm over the data period (1961 – 2014), which is not very significant. Moving average of 10 years period has also been displayed. It can be seen that there is very clear inter decadal variability of 20 – 30 years cycles. The decadal analysis revealed that the rainfall started decreasing from the second decade of the 20th century. This trend lasted up to the fifth decade. Then there is an increasing trend up to the 1962. Then there is a decrease of rainfall for next ten years. After that there is small variation. There is decreasing after 1997.

There is also an increasing trend in winter precipitation of Pakistan from 1961 to 2014. Winter rainfall is shown in Fig. The rainfall increased at the rate 1.95mm per decade with the total increase of 20.8mm over the period. The change is not significant statistically. Moving average of ten years period does shows random variation in the time series. Figure 18 displays the winter rainfall all over Pakistan. Non significance may arise because of taking average for all over the country. Some stations have increasing trend the other stations have decreasing trend. Therefore over all trends is increasing with low statistical significance. The analysis on provincial basis is made to see the regional changes in the country.

Winter rainfall has lesser inter decadal variability as compared to monsoon rains.  There is a major increase in the decadal average after 1977. This shift is again coherent with the monsoon rains. The rate of change of winter rains is +5.6 mm per decade and the total rise in the amount of precipitation is 59.6 mm over the data period, which is statistically non-significant.