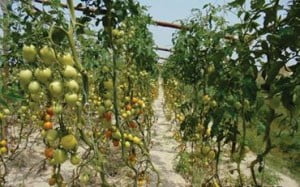 The development of a more productive, modernised and profitable agricultural sector is vital to securing a bright future for Pakistan. The Agricultural Innovation Program (AIP) Annual Conference 2015, to be held in Islamabad, will highlight how the latest agricultural innovations can be introduced to farmers in Pakistan for improved productivity and economic growth. Not only is it necessary to feed a growing population of 190 million people, but the economy also depends on it: one-fifth of national income comes from agriculture, which also generates 43 per cent of all jobs. According to the UN, the population of Pakistan will have risen by another 120 million in 2050. Global research partnerships with Pakistani scientists, with vital support from the government, are working to bring in a new generation of agricultural innovations for a more food-secure planet.

The International Maize and Wheat Improvement Center (CIMMYT) has played an important and historic role in supporting the growth of Pakistani agriculture. Norman Borlaug first came to Pakistan in 1960, when it was on the brink of mass famine. One of his first steps was to train local scientists.

In 1961, Manzoor A Bajwa became the first Pakistani researcher to go to Mexico for training, shortly followed by three others. Bajwa selected and brought back the experimental wheat line that would become ‘Mexi-Pak’, a white grain variety with the high gluten strength needed to make chapatis and provided good resistance to rust and powdery mildew. The variety was a success. Political support for the project saw Pakistan import 42,000 tonnes of seed from Mexico in 1966, the largest seed purchase in the history of agriculture at that time. In 1968, Pakistan became the first country in Asia to become self-sufficient in wheat, one of the crowning achievements of the Green Revolution.

After 50 years, CIMMYT is still working closely with Pakistani scientists to improve wheat and maize production systems from seed to farm, market to policy level. Seventy-eight per cent of wheat grown in Pakistan is the product of collaboration with CIMMYT. As well as the support of the Pakistan Agricultural Research Council, US agencies have long been committed partners in the country’s development.

Today, it is necessary to improve productivity in the face of high pressure on groundwater in the Indo-Gangetic plains, help farmers adopt more sustainable and productive agricultural practices despite higher labour and fuel costs, and support the local seed sector to deliver improved crop varieties in partnership with strong public research institutions. Finally, Pakistani agriculture must develop the capacity to not only mitigate the effects of climate change, but also to adapt and thrive in changing circumstances.

With funding from USAID and in partnership with PARC, CIMMYT is able to build further on its decades of work in Pakistan. Since 2013, CIMMYT has been leading the AIP to increase productivity and incomes in the agricultural sector through the dissemination of modern practices for cereals, horticulture and livestock. It may also be possible to introduce durum wheat as a commercial crop.

The AIP’s motto is to “innovate, grow more, live better”. This kind of programme, bringing together international, government, public and private actors in the pursuit of innovation across the board, exemplifies the approach needed to continue the development of Pakistan’s agricultural and food sector.

Since 2013, the programme has already introduced new disease-resistant wheat, heat- and salinity-tolerant rice and bio-fortified maize varieties to Pakistan, and introduced conservation agriculture machinery in 26 districts of Khyber-Pakhtunkhwa and Punjab with the collaboration of 13 national public and private sector partners. The programme has allowed five PhD and nine MSc students to begin study in agricultural science at American universities.

Along with the rest of South Asia, Pakistan has great potential to grow into a highly prosperous and food-secure country by introducing modern practices to improve farmers’ yields and livelihoods. Pakistani scientists, government bodies and private enterprises, international research institutes and global development partners lie at the centre of this. Funded by USAID, the AIP is living recognition of the need to invest in agricultural innovation through global, multi-sector partnerships.