Guar Gum known as guar flour is natural water soluble nonionic polysaccharides isolated from the seeds of Cyamopsis tetragonolobus (Linn, Family leguminous). This plant is cultivated from centuries in India and Pakistan. Extraction technology of guar gum was commercialized in USA in 1953. It is also grown in Australia, Brazil and South Africa in the southern hemisphere or in the Southern part of the USA, like Arizona and Texas. In 1949, guar gum is used in the food products in USA for the first time. In the US guar gum was brought before 1st World War principally as a green manure but was not applied industrially until 1943.

Out of total world production India accounts for 80% and takes its 70% production from Rajasthan. Leading country for production of guar in the world is India. Before 90s, in Pakistan 80% of the guar was cultivated in irrigated conditions so there was a higher yield per hectare. At that time guar was produced in Punjab (Muzaffargarh, Multan, Sargodha and Mianwali). It is also cultivated in Bahawalnagar, Bahawalpur and Sind Province. Production of guar gum at that time was between 180 and 250 thousand million ton in Pakistan. 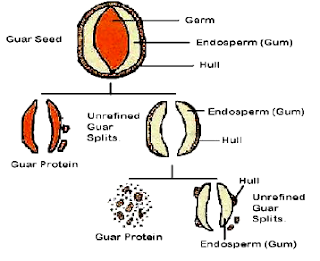 germ part of guar seed mainly contains protein while the endosperm part is mainly galactomannan (gum). Guar gum consists of the high molecular weight polysaccharides which consist of (1→4)-linked β-D-mannose units linear chain with (1→6)-linked α-D-galactose as side chains. The ratio between galactose and mannose is around 1:2. Its molecular weight ranges between 50,000-8,000,000 depending on chain length. 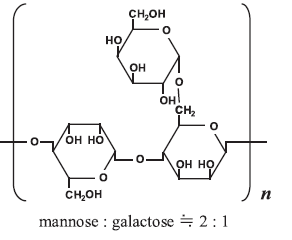 It belongs to the galactomannan family chemically. The composition of guar gum includes soluble fiber 75%, moisture contents 9.55%, insoluble fibers 7.6%, crude protein 2.16%, ash 0.54% and fat 0.78%. In guar gum, total dietary fiber is present in soluble form (80-85%) that may aid to reduce the glucose and cholesterol levels.

In polar solvents, guar gum dissolves and swells on dispersal and form strong hydrogen bonding while in non-polar solvents there is weak hydrogen bonding. With decreasing pH, increasing temperature and minimizing particle size the guar gum dissolution and viscosity development speed is usually enhanced. It is used as emulsifying agent, thickener and stabilizer in a variety of foodstuffs and contributes to total dietary fiber (TDF) of the seed as soluble dietary fiber (SDF). TDF made up 52–58% and SDF made up 26–32% of dry weight of seed. It is used as an additive in frozen food products due to its emulsifying and water binding properties to prevent ice crystals. It is used to moisturize, stabilize, thicken and suspend numerous liquid–solid systems.

Guar gum is diversified for its miraculous curing properties: