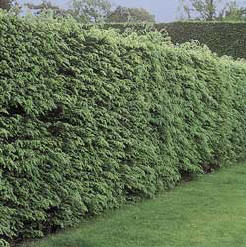 Hedgerows have long played an important role in agriculture. Since Bronze Age people first used them to divide fields, mark property boundaries and control livestock in Europe more than 5,000 years ago, farmers around the world have appreciated the benefits hedgerows provide.

Unfortunately, many hedgerows (some of them centuries old) were destroyed over the last 50 years both abroad and in the United States as agriculture moved into the Industrial Age. But in the United States today, Eastern farmers who have historic hedgerows are becoming interested in revitalizing them, and farmers in the West, a place without a real hedgerow tradition, are leading the hedgerow renaissance with new plantings. Grower’s curiosity and willingness to invest in hedgerows is being spurred on by research and by on-farm examples that show the myriad benefits, ranging from acoustic buffering to wildlife corridors.

What’s so special about hedgerows?
A hedgerow is defined as a row of trees or shrubs enclosing or separating fields. Talk to anyone who has experience with today’s hedgerow revival, from farmers to researchers to academic folks, and you get caught up in their exuberance:

Terence Welch, sales manager at Phil Foster Ranches in California, is a hedgerow advocate. “We have two farms, one with 50 acres here in San Juan Bautista, where we grow our cool-season crops, and the other is 200 acres east of Hollister, where it is 10 degrees hotter and where we grow most of our hot-season crops.”

Between the two farms they grow about 70 different organic vegetables, melons and tree fruits. They market through farmer’s markets, and to distributors and retailers in San Francisco and beyond.  Since the late 1990s, they have installed about 7,500 feet of hedgerow plantings in five different hedges at the two farms.

When asked how they got started, Terrence replies: “Well, I think that Phil [Foster] was hearing some good things about hedgerows,” he says. “He got togetherwith Sam Earnshaw at CAFF [California Alliance for Family Farmers], who is our hedgerow consultant. Sam came up with a design for the first hedgerows and they were planted here at San Juan. They were quite successful.”

Sam’s design relied on California native shrubs, grasses and flowering plants that would be drought tolerant to survive their five-month dry season, which comes during the heat of summer. The plants were established on a four-foot grid, with a permanent woody plant alternating with the grasses and other flowering plants.

They were initially planted with the intention of providing shelter and food for beneficial insects that would then spread into the fields–and they have. But their benefits don’t stop there.

“We are in a very windy area here in San Juan because the afternoon breeze shoots through in the summer,” says Terrence. “We have found we can use them for wind protection for crops like cucumbers, which is nice. Aesthetically, it is nice to have them on the farm. They provide bloom, or food, for native bees early in the spring and that’s really important for us. With the decline of the European honeybee [from disease and predator insects], we have to have substitutes. Native bees are important for pollinating crops, especially the tree fruits in early spring.”

Rachael Long is a farmer and a Pest Management Advisor with the California Cooperative Extension Service at UC Davis. She has seen the same benefits that Terence has on her own farm—where she and her husband have planted hedgerows among their fields of alfalfa, sunflowers (for seed), oats, rye and wheat—and in her research projects. “Hedgerows definitely attract beneficial insects,” says Long.

“What I have found over the years of doing work with hedgerows is that the best thing about them is that they can actually replace weedy vegetation and weeds tend to have a lot more pests than managed vegetation.”

Rachael did a two-year research project that compared pests in weeds to pests in hedgerows with managed native vegetation. She found the population of pests to be significantly lower in the managed vegetation and the population of beneficials to be much higher. Best of all, some of the graduate students who have done research with her have shown reduced pests in adjacent crops.

Not one-size-fits-all
Hedgerows aren’t cookie-cutter plantings that are the same from one farm to the next. Farmers who want to install them need to do some planning before they start planting. “For each landowner and for each field within a farm, there may be unique opportunities and limitations that need to be considered when planning a hedgerow,” says Michael Gold, Associate Director for the Center for Agroforestry at the University of Missouri.

Jude Hobbs, of Agroecology Northwest in Eugene, Ore., agrees. “People often want it to happen right now, but if you are doing long-term planning you have a better chance of success.”

Both Michael and Jude say farmers should ask themselves some questions when planning for a hedgerow: What function do you want it to serve? Where are you thinking about having it? What crops will be grown near it? How much time do you have to maintain it? This is an important consideration in the first few years when weeds can overtake the hedgerow or when critters can eat it before it gets going.

What kind of water source do you have? Can you apply water to it for the first three to five years for establishment? What kind of soil do you have? Is there a concern about flooding? What is your budget? All these will have an impact on species selection.

Planning can apply to just one criteria of plant selection: height. “Say you have 600 acres planted in corn, beans and wheat in large fields,” he says, “then you are well-suited to put in a more traditional windbreak-style hedgerow, with some tall trees included in the mix of plants you select. If you move the rows closer together, say in a pasture, it is called alley cropping and you may choose trees that don’t grow quite as tall. On a small farm, around some vegetable plots, you may want hedgerows that only have shrubs and herbaceous plants so you aren’t shading too much area.”

Production Values
Although much of the emphasis on hedgerows is in relation to their tangential benefits, with the right design they can also have productive value, bringing in revenue to the farm. “Implicit in everything we are trying to do in agroforestry is the idea that we have a production benefit from our plantings.  If, for example, you are thinking of adding diversity to your operation, you can fit tree species that have commercial potential into your hedgerow. You could use pecans in lower areas, move up to walnuts on slightly drier ground and add chestnuts further up the slope.”

Products from hedgerows can range from the obvious, like fruit, nuts or firewood, to the more esoteric, like medicinal herbs or flowers and greenery for the floral industry. Agritourism operators can take advantage of the birds that are attracted to the hedgerows: For the bird watcher, hedgerows attract a wide assortment of neo-tropical songbirds; for the hunter, an abundance of upland game birds, such as turkey or quail.

When income from the hedgerow is one of the functions you are considering, then you may be looking at some non-native species, bringing up one concern: invasives.
Since your hedgerow will border crops, avoid plants that have a tendency toward weediness. “Queen Anne’s Lace is the queen of plants for attracting beneficials and it is a traditional medicinal plant, but it can be quite invasive,” Jude says.

Establishment is Key to Success
All the experts agree that getting a hedgerow started takes a serious commitment of time and money. “Once they get going, if you planted the right things, you are not going to be fertilizing or watering, so there is not a whole lot of cost in maintaining them after they are established,” Terence says.

“But you want to have a pretty good idea of how the young plants are going to make it through that first year, because the initial cost is pretty much the entire cost of the hedgerow.”

The biggest problems during establishment tend to be weeds and water. The experts recommend good soil preparation, the use of mulch and some type of irrigation system for at least the first three years.

Jude, who is a practitioner of permaculture, adds one more recommendation: “Start small—even if you only plant 60 feet—-and plant intensively. Have small successes rather than being overwhelmed by large failures.”