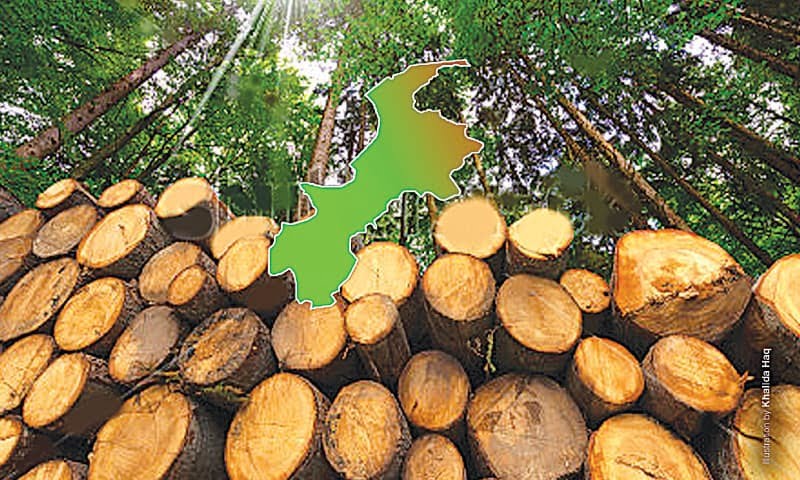 In a drive against deforestation, the KP government has launched a campaign for planting one billion trees in the province. But no such exercise is in sight in the other provinces, even though they do have some fiscal space. And the federal government says it is willing to provide them full support.

Federal Minister for Climate Change Senator Mushahidullah Khan said recently his ministry is coordinating with provincial governments for boosting the country’s forest cover to 6pc of the landmass by end of 2015 and to 12pc in next five years. At present, the forest cover is less than 5pc.

Under the Green Growth Initiative, the KP government intends to increase forestland by 22pc, conduct bi-annual plantation drives and double the size of national parks within five years. But Sindh and Punjab have undertaken only occasional reforestation programmes on a much smaller scale.

Mangroves around the coastal belt of Sindh continue thinning out due to excessive cutting of trees for firewood with no effective check on this practice. These mangrove forest not only provide a natural shield against cyclones but are also breeding bed for different kinds of fishes and shrimp. So, the need to protect and augment them is quite obvious.

Pakistan has seen its forest cover shrinking overtime primarily due to felling of trees by timber mafia in Gilgit-Baltistan, federally-administered tribal areas and KP. According to one estimate, the area under forests in GB alone has reduced to 295,000 from 640,000 hectares 20 years ago.

Sources in the Ministry of Climate Change say the annual economic cost of rangeland degradation and deforestation comes close to Rs6bn.

“Avoiding this huge cost and meeting the millennium development goal of increasing the forest cover to at least 6pc by the end of 2015 have been the main drivers behind our efforts for reforestation,” says a ministry official. “But after complete devolution of agriculture at provincial level (since the beginning of FY10), the federal government has been playing the role of a facilitator. We’re also coordinating with global agencies and provinces to ensure that Pakistan, as a whole, meets MDGs goals in environmental improvements.”

The most important thing for the provinces to do is to stop illegal timber harvesting that continues to thrive across Pakistan though the KP government has now decided to deal with the timber mafia quite seriously.

The provincial authorities are in the process of raising a dedicated force to scout forestlands and stop every illegal activity going on there, including illegal felling of trees and animal grazing.

The frequent breakout of fires, land-sliding and flash floods have also led to deforestation. According to an official estimate, 18.5pc of the country’s total forestland had turned into non-forest area by 2010.

Officials of the Ministry of Climate Change say that in the past few years deforestation was tackled mainly through half-hearted campaigns for reforestation which was weakened further, particularly in KP and in the tribal areas, due war against terrorism.

But now the ministry is convincing all provinces to tackle the issue with a multi-pronged strategy with its main features including campaigns for creating awareness about the importance of forests, administrative check on illegal activities that lead to deforestation, better forest care to avoid natural decays and, finally, planting of new trees. Environmentally sustainable development is the key to better exploitation of natural resources.

Whereas urbanisation and lifestyle changes in recent years have accelerated growth of domestic economy, nothing has been done to see how they have put additional pressure on cities’ infrastructure, polluted our coastal areas and led to poorer health of urban workforce.

These and similar developments entail a higher level of commitment to combating environmental challenges including deforestation because its ill effects on biodiversity and climatic conditions would take a heavy toll on agriculture, livestock, fisheries and agro-based industries, warns a former head of Planning Commission of Pakistan.