In developing countries, agriculture continues to be the main source of employment, livelihood and income for between 50-90 per cent of the population. And small farmers make up the majority, up to 70?95 per cent of the farming population. 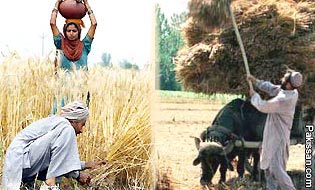 Small farmers face the greatest challenge of integration and competitiveness in new markets and at the same time, they are constrained by lack of basic public services as a result of recent policy reform, market liberalization, as well as budgetary and capacity limitations.
Small farmers have traditionally survived on subsistence production though, many, in the last three decades have experimented export crops with occasional success and many failures. They have not benefited from industrialization and export-orientation of agriculture. In the globalized market, small players have been marginalized.
Yet economically, they should not be ignored. Policies which have led to their marginalization have meant a continuation of the vicious cycle of poverty for many sectors, highly uneven development and hence the inability of many developing countries to attain satisfactory levels of overall development.
Despite steady economic growth in many Asian countries over recent decades, small farms still dominate in rural areas. According to the 1990 FAO World Agricultural Census as of the mid- to late 1990s farm size averaged 1.6 hectares in both Africa and Asia.
While in Latin America it averaged 67 hectares, reflecting highly unequal land distribution rather than advances in economic development. In fact, land holdings are becoming increasingly subdivided, suggesting that agriculture is absorbing the rising population.
In Africa, for instance, the average size of landholdings shrank from 1.5 hectares in 1970 to 0.5 hectares in 1990 in Congo, 62 per cent of all farm households operated land holdings of less than 0.5 hectares. 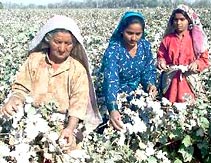 A similar trend was observed in Asia. In China, average farm size decreased from 0.56 hectares in 1980 to 0.4 hectares in 1999. In Pakistan, it steadily declined from 5.3 hectares in 1971?73 to 3.1 hectares in 2000. During this period, the number of small farms more than tripled.
The growing increase in the number of holdings might be the result of the combined effect of institutional, technological and demographic factors.

There have been sub-divisions of farms because of fragmentation, inheritance and transfer. Since land in agriculture production process is the natural agent, therefore decreasing size of holding has detrimental effect on investment, farm productivity and farm income.
The small farms are occupying a pivotal position both in terms of number and area, making it essential to improve their operational performance for a sustained and broad based economic development.
Many of the owners of small farms may be too poor to participate in the process of agricultural development. An increased participation of small farmers is not only essential for any substantial breakthrough in agricultural development, but is also desirable to reduce unemployment in the rural areas.
It has been found that labour use intensity is linked to farm size, the marginal productivity of labour of the small land holdings is lower and that of big land holdings is higher, and hence small farms are highly productive (in terms of output per acre), but appear largely unprofitable when the cost of family labour is imputed (based on average market wage).
More than one-half of the rural population in Pakistan is landless while 2.5 per cent control over one-third of agricultural land. Inequality in land ownership is one of the reasons why overall agricultural yields remain below than that of other countries with similar resource endowments.
There is another view suggesting that large farms on the average are more efficient than small farms with its own assumptions.
Large farms have an advantage due to lower average fixed cost per unit of output as the fixed costs are spread over a larger output. The small farms are in a disadvantageous position, as they have to bear certain unavoidable costs with a smaller quantity of output. 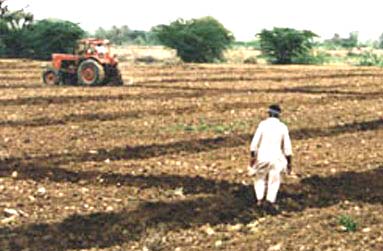 Productivity differences by farm size have been observed in many developing countries including Pakistan. A specific farm size may be more efficient in the production of specific output while another farm size may be more efficient in the production of another commodity. So, there exists a productivity gap at various farm sizes.
Variability in productivity may be attributed to the differences in labour input, cropping pattern, cropping intensity and technological differences. This productivity gap leads to structural difference between small and large farms.
Small and large farms, which differ on the basis of farm costs including cash costs and imputed costs, labour use, mechanization and management, have their own advantages and disadvantages.
Many researchers have shown that productivity decreases with increase in farm size. It was true before the advent of green revolution technology but after the introduction of green revolution, the inverse relationship between farm size and productivity has either weakened or even reversed.
This does not preclude the importance of small farmers for agricultural economy as major proportion of the farming community is made up of these small players. If given proper access and training, the small farmers can produce better from the land that is culturable waste or lying idle under the control of influential farmers.
A pervasive pattern in the developing countries is the low agricultural production and yield per acre. The small farmers do not have access to hired labour and credit. They lack scientific knowledge and training, have no or low education and low social status. All these factors seem to have been creating hindrance in the adoption of new farm practices and the achievement of optimum level of input use.
The lower rate of adoption of modern farm practices ultimately results in low production that leads to slow rate of economic growth. Any strategy formulated for improvement of agriculture in isolation of small farms is very unlikely to be successful in the long run.
Successful small farms must be managed intensively. They must earn more returns per acre, per rupee invested and per unit of production. The higher net returns on intensively managed farms come from the efficiency with which various practices, methods and enterprises are integrated.
As different decisions have to be taken for profit maximization like input mix and enterprise combination so, it is necessary that knowledge about costs and returns be provided to the farmers. It will help the farmer in choosing the proper combination of enterprises and ensuring the optimum use of resources.
The prosperity lies in harnessing our resources to the maximum extent particularly in the largest segment of economy namely agriculture by pushing forward the production possibility frontier through better use of irrigation water, fertilizer, draught power, improved seed, plant protection measures, management, etc.
The crucial problem facing agriculture is how to increase yield per acre by improving per man efficiency and identifying the factors affecting the development of agriculture within homogeneous and heterogeneous ecological conditions. But should the range of variation be very large is a matter of concern.
Low productivity means fewer earnings, less saving and consequently low level of income, ultimately causing poverty. Should the productivity of such farms be raised to the level of those, which are producing relatively high?
In view of the scarcity of farm land and the limitation of extensive cultivation, the importance of raising productivity may not be underestimated.
Higher rural productivity will lead to faster growth of agriculture, rural employment and funds for industrial development along with providing food to ever increasing population.
However, the productivity gains restricted to big farmers may lead to deterioration of social unrest, income inequalities and political instability. At the same time, increasingly integrated, globalized, and consumer-driven agricultural and food markets require small holders to adapt to a new environment.