They may not be the only pollinators, but they surely get most of the attention. The attention is well-deserved since the bee population is declining. There are many reasons for the decline of bees—the latest possibility is climate change. It has been found that the weather is warming up earlier and causing plants to bloom before the bees come out of hibernation. Because of this, many plants aren’t pollinated at all or at a much lower rate. Our fruits and vegetables could become scarce if this continues. Although the act of pollinating benefits us humans, the pollinators are actually interested in the nectar that is hidden in the base of the flower. As the insect moves from flower to flower, it carries the pollen and fertilizes the flower to make a seed, which may be disguised as a fruit or vegetable.

Lucky for us there are other insects that pollinate plants. Looking at a chart of bloom periods shows that many trees (river birch, maple, serviceberry, and willow) are pollinated in March; and in April (flowering dogwood, silver bell, tulip poplar and eastern redbud). A few perennials are pollinated in April (sage, lupine, cranesbills, phlox, and crested iris). The pollinators for these early bloomers include bees, flies, beetles, butterflies, and moths. The perennial wildflower, bloodroot, can be pollinated as early as March by bees, beetles, or flies. The river birch is pollinated by wind in March or April. Yes, wind is a major pollinator of evergreen trees and grains—this is why we are threatened by a diet of oatmeal if we lose our insect pollinators. 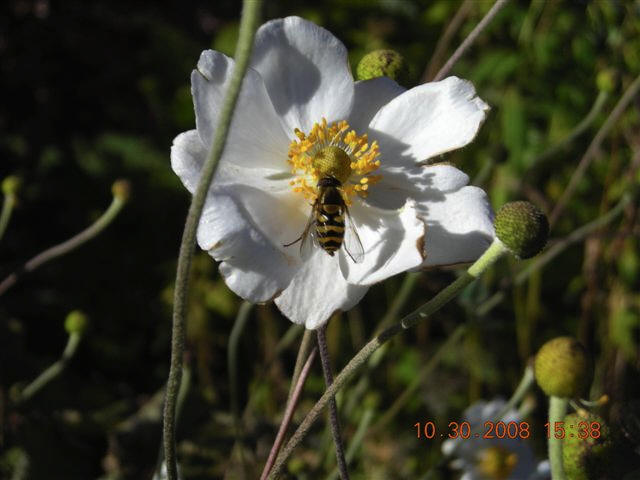 Throughout the late spring and summer it is easy for everyone to see and observe the many insects, bats, hummingbirds, and small animals such as meadow voles and mice that transfer the pollen with their fur.

If we skip ahead to the fall months, the frequency of pollination lessens but does not end. Both New Jersey tea shrubs and dwarf sumac are pollinated in September. Perennials yield a larger list: various asters, several sunflowers, and goldenrods. In October some of these same perennials are still being pollinated, and wavy-leaved aster can be pollinated as late as November. In these later months some of the migrating butterflies perform the pollination service along with the usual pollinators.

In general there is little pollination in December, January, or February. But think of the witch hazel shrub. Depending on the type, it can bloom in November (the native type), or January, February or March for the Chinese or Japanese types of witch hazel. A few bright sunny days in February can bring out the sweet-smelling blossoms and attract flies and maybe some bees. The hellebore, also known as the Christmas rose, can be blooming in the snow and is pollinated by beetles. And snowdrops, early crocus, and early daffodils all need to be pollinated by whatever insect has come out of hibernation or has hatched from its egg.

In order to have butterflies that pollinate our flowering plants, we must also have the caterpillar they come from. Caterpillars can be very specific in what they will eat. The Monarch butterfly caterpillar only eats leaves from the milkweed family after it has hatched from the egg. This is the most well-known combination, but every caterpillar has its preferred food. If caterpillars are eating your parsley just plant more so there is enough for the insects and for you. If you consider violets in your grass a weed to be killed, you are destroying the habitat of the Fritillary butterfly’s caterpillar. Thistles may be considered noxious weeds, but they support Painted Lady butterflies. Many of the best host plants are natives. The plants and the insects they support have developed together to form a symbiotic relationship.

To attract more pollinators, try to add plants that provide additional seasons of bloom, create various heights for shelter, and include the host plants. Your garden may look a little messy with dead snags and leaf litter but you are providing food and shelter for all the pollinators. You will find that you enjoy your garden a lot more when you discover an insect previously unknown to you and are able to observe varieties of butterflies and birds that make your garden more exciting.