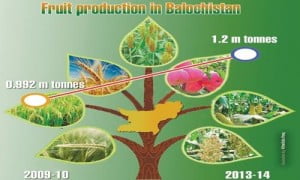 BALOCHISTAN’S agricultural production is showing promising signs as a result of higher investment in research and development, better farming practices and an improvement in the law and order situation.

Officials say a shift is taking place from the rise in output through cultivation of larger areas of land to higher per-hectare yields. But, so far, this shift is visible only partially, and its sustainability will depend on whether money keeps flowing into key research and productivity projects, they say.

Similarly, the output of all vegetables (minus potato) has also recorded a modest 5pc growth over the last four years, rising from 510,000 tonnes in 2009-10 to 535,000 tonnes in 2013-14. And here again, it is higher per-hectare yield that has made the difference because the total area under cultivation of all veggies (minus potato) shrank from about 53,000 hectares to 51,000 hectares during the same period.

Balochistan agriculture department officials say the yields of fruits and veggies have gone up mainly because of the introduction of new farming techniques. The hydroponic cultivation of veggies, for example, is gaining momentum, making it possible for farmers to improve yields. Similarly, experiments with fruits-seed lines, particularly in case of apples, and better care of fruit orchards have also helped.

In the case of major crops, not only their yields but the area under their cultivation has also increased. The per-hectare wheat yield rose to 2,190kg in 2013-14 from 1,460kg in 2009-10 — an impressive cumulative growth of 50pc in four years

In the case of major crops, not only their yields but the area under their cultivation has also increased. The per-hectare wheat yield rose to 2,190kg in 2013-14 from 1,460kg in 2009-10 — an impressive cumulative growth of 50pc in four years. Wider use of high-yield varieties of wheat seeds and improved ways of sowing and pre- and post-harvesting of the crop with trimmed losses were all responsible for this, officials say.

A trend of higher per-hectare yield has become visible in other food crops as well. That is why the total production of all cereals (wheat, rice, maize, jowar, sorghum and barley) in Balochistan rose past 1.51m tonnes from 1.22m tonnes during the period under review. Meanwhile, the area under cultivation expanded only marginally from 605,000 hectares to 622,000 hectares.

However, the food crops, which need more water, have not performed so well. Rice and sugarcane yields have shown a declining trend. Rice production fell from 645,000 tonnes to 588,000 tonnes, with the yield down from 3,393kg to 3,275kg per hectare. And the sugarcane output slipped from 35,600 tonnes to 32,200 tonnes, with the per-hectare yield down from 51 to 46 tonnes.

Officials say since rain-fed cultivation of rice is common, inconsistent rainfalls and a lack of water-harvesting continue to keep the crop’s per-hectare yield low. Similarly, scant and often disrupted canal water supplies have affected the growth in the yields of both rice and sugarcane. Their harvesting also suffers from a lack of best farming practices, which too has a telling impact on their yields.

The production of potato, gram and some other pulses have not been picking up because of the improper timing of the switching of crops and the inadequate supply of certified seeds.

Officials lament that investment in research and development is still limited. “In the past two annual budgets, enough money was earmarked for the overall agriculture sector, but the bulk of it went to projects in agri-infrastructure and livestock etc. We are still short of dedicated funding resources to conduct research on food or fruit crops,” one of these officials told this writer.

Officials say the Balochistan government is in talks with USAID and some private organisations in Australia, UAE and Turkey to help the province further boost the per-hectare yield of its food, fruit and vegetable crops.

The Balochistan agricultural department’s own research wing is currently conducting extensive research on soil fertility and health. Once the project is completed, it will help improve soil conditions and the yields of cereals, including wheat and rice (particularly basmati rice).

Initial research, however, has indicated that improper use of fertiliser mix, unscientific land levelling and preparation, and flawed seed-sowing techniques have all impacted the soil’s health over time. For tackling such issues, more frequent awareness programmes for farmers need to be launched.