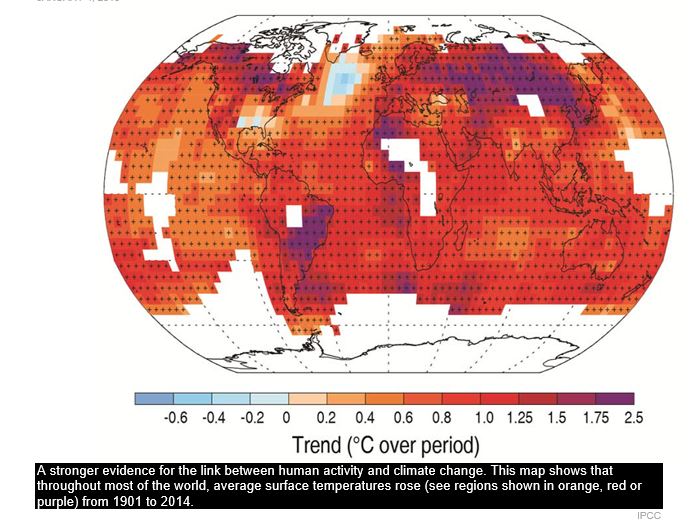 Earth has a fever. Scientists are more certain now than ever before that people are largely to blame.

It is “extremely likely” that human activities have contributed greatly to Earth’s increasing temperature, reports an international group of climate change researchers. How likely is that? Scientists say they are now 95 to 100 percent certain that people have had a big role in warming.

Researchers from the Intergovernmental Panel on Climate Change, a United Nations group known as IPCC, analyzed thousands of studies. Most of those studies contained evidence suggesting a link between peoples’ actions and global warming. The new report’s conclusions are even more confident of humanity’s role in climate than the last IPCC assessment, issued in 2007. But even back then, IPCC considered that human activities “very likely” have been boosting global warming.

Those activities include burning fossil fuels, such as coal and gas. That burning releases a greenhouse gas called carbon dioxide. In the atmosphere, this gas traps heat close to Earth’s surface. And that helps warm the planet. According to the report, carbon dioxide levels have increased by 40 percent since people started burning fossil fuels for energy, about 260 years ago.

In the last 60 years, “the atmosphere and ocean have warmed, the amounts of snow and ice have diminished, sea level has risen, and the concentrations of greenhouse gases have increased,” the IPCC reports.

It also concluded that it “very likely” that within this century, glaciers will continue to melt and Arctic sea ice will thin even more. Less snow will cover the ground in the Northern Hemisphere, the new report predicted. And sea levels will continue to rise — most likely at a rate faster than that what’s been seen in the last 40 years. Rising sea levels puts low-lying islands and coastal communities at risk.

Scientists have been studying climate on a global scale since the 1950s. To do this, they collect data from satellites and on-the-ground instruments around the world. The IPCC researchers studied the measurements that were collected. They also looked at historical climate data — collected from ancient rocks — some dating back millions of years.

Scientists study the past to predict the future, but uncertainty remains about exactly what will happen. The IPCC predicts that between now and 2100, Earth’s temperature will increase between 0.3 and 4.8 degrees Celsius (0.54 and 8.6 degrees Fahrenheit).

Thomas Stocker, a climate scientist at the University of Bern in Switzerland, worked on the new IPCC report. At the report’s release in Stockholm, Sweden, he said he hoped people would act to slow global warming. Limiting further warming, he said, “will require substantial and sustained reduction of greenhouse gas emissions.”

The IPCC also tackled a point that’s often made by those who doubt that people might be to blame for global warming. These skeptics point to data from the last 15 years. During this time, the rate of warming has leveled off. But data from such a short time period can’t be used to see the big picture, the IPCC said.

Climate change skeptics often pick out weather changes that fit their arguments, says Paul Wapner. An expert in environmental politics at American University in Washington, D.C., he did not work on the new IPCC report. It “makes clear,” he told Science News, “that these trends cannot be questioned.”

Carbon dioxide A gas produced by all animals when the oxygen they inhale reacts with the carbon-rich foods that they’ve eaten. This colorless, odorless gas also is released when organic matter (including fossil fuels like oil or gas) is burned. Carbon dioxide acts as a greenhouse gas, trapping heat in Earth’s atmosphere. Plants convert carbon dioxide into oxygen during photosynthesis, the process they use to make their own food.

Climate The weather conditions prevailing in an area in general or over a long period.

Climate change Long-term, significant change in the climate of Earth. It can happen naturally or in response to human activities, including the burning of fossil fuels and clearing of forests.

Fossil fuel any fuel (such as coal, oil or natural gas) that has developed in the Earth over millions of years from the decayed remains of bacteria, plant or animals.

Glacier A slow-moving river of ice hundreds or thousands of meters deep. Glaciers are found in mountain valleys and also form parts of ice sheets.

Global warming the gradual increase in the overall temperature of Earth’s atmosphere due to the greenhouse effect. This effect is caused by increased levels of carbon dioxide, chlorofluorocarbons and other gases in the air, many of them released by human activity.