In 1870s the colonial era Punjab government decided to increase the cultivated land by making barrages and canals to meet the demand at European markets. This led to the canal based irrigation of the areas now comprising the district of Faisalabad and Toba Tek Singh. In 1880, a colonial officer, Captain Poham Young, with the support of Sir James Broadwood Lyall founded the new Town it was named Lyallpur after his Surname. proposed a new town. The design was based on the Union Jack, with eight roads radiating from a large clock tower in the center.

It was called the Chenab Bar after renamed as Lyallpur District, a large number of Sikhs from Eastern Punjab from Ludhiana District, Jalandhar District and Ambala District migrated to this new region where they established new Villages naming them after their own Villages which they left. The Majority of the villages were named a Chak. Muslims in Masses settled in this new colony.

In 1903 it was decided to establish an agricultural college. In 1904 the new district of Lyallpur was constituted, composed of the tehsils of Lyallpur, Samundri and Toba Tek Singh, with a subtehsil at Jaranwala which later became a full tehsil. By 1906, the district headquarters began to function in Lyallpur and all the bazaars and settlements within the bounds of a ring road were nearing completion. The city began to spread outside the circular road. The Town Committee was upgraded to a Municipal Committee in 1909 and the Deputy Commissioner was appointed as its first chairman. In 1916, the grain market saw its shops surging with customers. In the same year the civil hospital was expanded. With the advent of World War II, there was an increase in political awareness across the city. Revolutionary meetings were held, fiery speeches made, and slogans written on walls.

The First Colonisation officer Raja Aurangzeb Khan made sure that no individual in this district owned more than 25 squares (625 acres (2.53 km2)) of land. The merit or method of allotting the land was to check each individual’s hand who was applying for some land, and if the hands showed that individual had worked hard in the past, only then was land given to him, which has led to a district where there aren’t any big land owners, as the land has been equally distributed amongst hard working men and it is their hard work that has led to Faisalabad becoming the third richest district in Pakistan.

In 1977, the name of the city and the District was changed to “Faisalabad” (City of Faisal), in honour of the late King Faisal of Saudi Arabia, who was held in high regard in Pakistan. In 1985, the district was upgraded to a division with the new districts of Faisalabad, Jhang and Toba Tek Singh.

In 1943, Mohammad Ali Jinnah visited the District and the City where he addressed a gathering of over 2 million in Dhobi Ghat Grounds.

During the partition of 1947 A.D. the entire Sikh population also Hindus left for Eastern Punjab (India). There are some Sikhs living in the City of Faisalabad also in district, with Sunni Muslims, Shia Muslims and Ahmadiya sect. 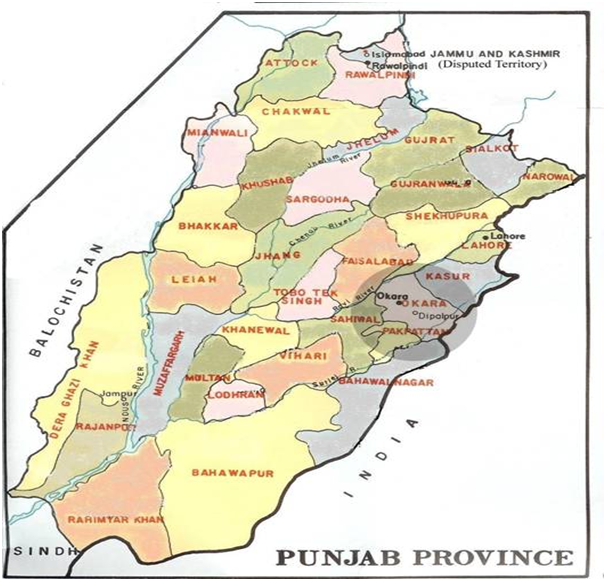 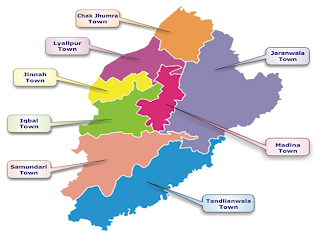