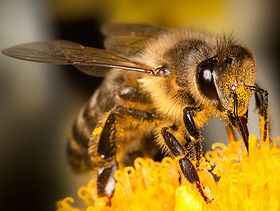 Exactly what plants do honey bees visit on their daily forages for food in rural Madison County, Ohio? A research team led by Dr. Reed Johnson from The Ohio State University has found that the answer lies in pollen DNA.

They’ve collected pollen from a trapping device beneath beehives and developed a new method utilizing DNA metabarcoding to uncover the plants from which the pollen originated.

“Understanding honey bees’ pollen preferences can provide insights to what a colony needs and help improve the quality of foraging habitats,” says Dr. Chia-Hua Lin, a postdoctoral researcher in the Department of Entomology at The Ohio State University.

Their work will not only provide other researchers with a foundation for uncovering information from pollen DNA, it will also enable bees to do some environmental science fieldwork.

“A honey bee colony is like an army of research assistants–thousands of enthusiastic, flying research assistants that work all day and trespass with impunity,” explains Doug Sponsler, a graduate student in the Department of Entomology. While foraging each day, bees are unknowingly monitoring plants in their surrounding landscapes, some hard to reach by researchers, and collecting valuable data in the form of pollen. They can also serve as bioindicators of pollution and pesticides.

Rodney Richardson, a graduate student in The Ohio State University’s Department of Entomology, explains that traditional methods of analyzing pollen data under the microscope suffer from being difficult, slow, and often imprecise. “There’s a huge bottleneck in the workflow because ultimately every sample needs the undivided attention of one expert behind a microscope,” says Richardson.

DNA metabarcoding is a promising alternative because it is a way to rapidly identify the genera or even species present in a mass DNA sample of multiple organisms. The technology has been gaining popularity across many fields of biology, and Richardson and colleagues are among the first to apply it to pollen analysis. Their new protocol is available in the January issue ofApplications in Plant Sciences.

“It’s a first attempt that lets other researchers know what to expect, using the ITS2 marker in particular,” explains Richardson.

Metabarcoding resulted in higher sensitivity and resolution, and identified twice as many plant families than microscopic analysis of the same pollen samples. It lacked, however, the ability to quantitatively assess the relative proportions of each pollen type. This will need to be addressed in future advancements.