Weeds are the problematic issues in the fruits crops of the Pakistan and world also. How and when we will control the weeds from the fruits. Fall is a good time for application of residual and foliar-active herbicides in established tree fruit and small fruit. By mid-October, a frost usually has killed annual weeds and frozen off the foliar portion of perennial broadleaf weeds. Perennial grasses, such as quackgrass, orchardgrass and turfgrasses, survive frosts but usually retreat somewhat. By waiting to spray until most weeds are dead, more herbicide reaches the soil and long-term weed control improves.

Herbicide application in fall appears to be counter-intuitive, in that the intended activity is five to six months away. However, experience has shown that herbicides applied in fall outperform the same treatments applied in the spring. Evidently, cold soil 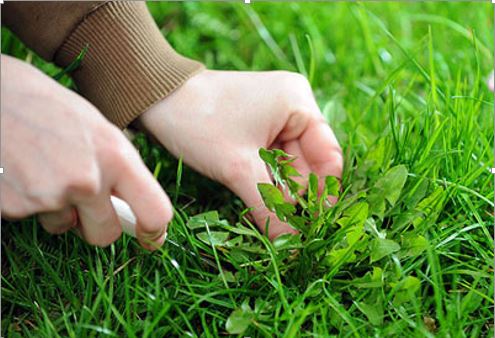 temperature reduces herbicide degradation, and rain moves the herbicide into the upper layers of soil, where it is active as soon as weeds begin to germinate in spring. Little herbicide is lost by runoff or wind erosion during winter.

Fall application should be made after fruit trees and bushes are dormant. Under those conditions, there is little chance for crop injury, so herbicides can be sprayed against the trunk and stems of the crop and into the center of bushes. This allows for coverage of 100 percent of the area in the tree line. In spring, new growth often appears and bark softens before herbicides are applied. This can result in tree injury.

Most of the long-residual herbicides labeled for fruit trees may be applied in spring or fall. This allows growers many choices for various combinations throughout the year. Growers normally should use at least three residual herbicides with different modes of action each year. Each time a residual herbicide is applied, a foliar active herbicide should be included in the tank-mix. In fall and early spring, glyphosate or an auxin disruptor should be used. When there is new growth on trees or bushes, paraquat (Gramoxone), carfentrazone (Aim) or glufosinate (Rely) should be used to kill weeds, but cause no long-term injury to crop plants. Inclusion of pyraflufen-ethyl (Venue) with these post-emergence applications improves burndown and broadens the weed control spectrum.

Some herbicides are more effective when applied in fall. Pronamide (Kerb) is most effective against quackgrass in fall. Dichlobenil (Casoron) granules traditionally have been applied in fall, which allowed the herbicide to disperse into the soil over winter, and provide three to four months of perennial weed control next season. The liquid formulation of Casoron appears to be equally effective in fall. However, several uses are only on the granule label.

An effective weed control plan might include pronamide plus norflurazon (Solicam) plus glyphosate in fall, followed by simazine (Princep) plus flumioxazin (Chateau) in the spring. Glufosinate (Rely, Lifeline, Reckon) or paraquat (Gramoxone) may be applied in June or July to kill emerged weeds. In fall, indaziflam (Alion) may be applied with glyphosate for preemergence control the following year. In the second spring, apply diuron (Karmex) plus oryzalin (Surflan) plus paraquat, followed in mid-season by Aim plus Venue plus fluazifop (Fusilade). Saflufenacil (Treevix) may be applied during the growing season to kill emerged broadleaves, including horseweed. It may be applied four times with zero days before harvest.

By applying herbicides several times in a season, fruit growers will improve overall weed control and reduce potential for weed resistance. They also will reduce potential of crop injury from over-use of some chemicals.

E Department of the Environment Sciences, University of Agriculture Faisalabad