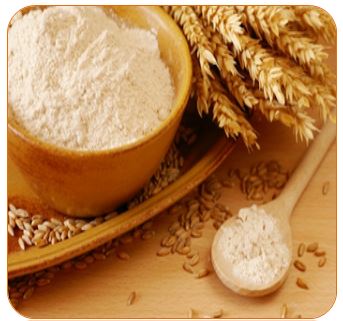 Flour is a finely ground powder prepared from grain or other starchy plant foods and used in baking. The vast majority is made from wheat. Flour has been made since prehistoric times. The earliest methods used for producing flour all involved grinding grain between stones. These methods included the mortar and pestle (a stone club striking grain held in a stone bowl), the saddle stone (a cylindrical stone rolling against grain held in a stone bowl), and the quern (a horizontal, disk-shaped stone spinning on top of grain held on another horizontal stone). These devices were all operated by hand.

The first mill in the North American colonies appeared in Boston in 1632 and was powered by wind. Later mills in the region used water.

Although most flour is made from wheat, it can also be made from other starchy plant foods. These include barley, buckwheat, corn, lima beans, oats, peanuts, potatoes, soybeans, rice, and rye. Many varieties of wheat exist for use in making flour. In general, wheat is either hard (containing 11-18% protein) or soft (containing 8-11% protein). Flour intended to be used to bake bread is made from hard wheat. It also intended to be used to bake cakes and pastry is made from soft wheat. All-purpose flour is made from a blend of soft and hard wheat. Durum wheat is a special variety of hard wheat, which is used to make a kind of flour called Semolina. Semolina is most often used to make pasta. Flour usually contains a small amount of additives.