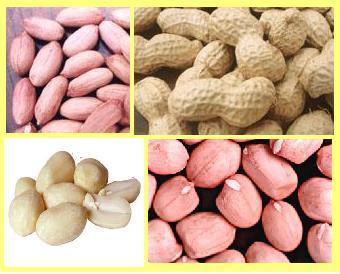 Groundnut is the most important cash crop of the Pothwar region. Area under groundnut crop during 2003-04 was with annual production of 114, 000 tonnes and average per hectare dry pods yield is 1121 kg. Its cultivation is mostly concentrated in Rawalpindi Division. Groundnut is very important source of oil (43-55 %) and protein (25-28 %). Its oil contains about 22 % linoleic acid and 61 % oleic acid and is considered one of the best vegetable oils for human consumption. The Oilseed Programme of NARC has developed the following groundnut varieties for commercial cultivation:

It is a Spanish semi bunch type variety with medium pod size having two seeds per pod. It matures in 150-160 days and its yield potential is 3500 kg/ha with oil contents of 52%. It was released in 1991.

It is a Spanish bunch type, early maturing (120-130 days), variety suitable for double cropping with wheat, and thus increasing the cropping intensity in rainfed areas. Its yield potential is 2500 kg/ha and was released in 1993.

These varieties are grown on 10% of the total groundnut area and giving 25-30% more yield than traditional varieties, and, thus, are contributing about Rs. 190 million annually to the national economy.