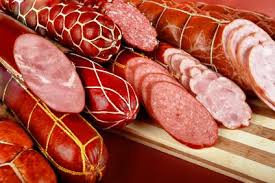 Cancer & that red meat is a probable cause of cancer.

Meat is animal flesh that is eaten as food. Humans are omnivorous, and have hunted and killed animals for meat since prehistoric times. The advent of civilization allowed the domestication of animals such as chickens, sheep, pigs and cattle, and eventually their use in meat production on an industrial scale.

Meat is mainly composed of water, protein, and fat and is usually eaten together with other food. It is edible raw, but is normally eaten after it has been cooked and seasoned or processed in a variety of ways. Unprocessed meat will spoil or rot within hours or days as a result of infection with and decomposition by bacteria and fungi.

The International Agency for Research on Cancer announcement that processed meat is a cause of cancer and that red meat is a probable cause of cancer, needs to be taken in the context of what these classifications mean. Crucially, these classifications don’t indicate the size of the risk, how many cases of cancer they cause or what sort of dose is needed. Group 1, into which processed meat, includes tobacco smoking, alcoholic drinks, air pollution and sunlight. Group 2A includes things which IARC believe are probably carcinogenic but for which there is insufficient evidence to be more definitive. DDT is an example of a group 2 “probable carcinogen”, but so are burning wood for fuel, high temperature frying, or working as a hairdresser. Again, the classification only relates to the quality of the available evidence, not the magnitude of the risk. The cancer risk from tobacco is much, much higher than the risk from eating processed meat, despite reports in some of the media covering this. Unless you are eating very large amounts on a regular basis, the increase in cancer risk is relatively very small.

IARC has concluded that the evidence in favour of an association between processed meat consumption and cancer, probably because of the ingredients used in processing, meets their criteria for placing this class of foods on the list of recognized human carcinogens. It is important to emphasize however that this classification reflects the strength of the evidence for an effect, not the actual size of the risk.

The evidence on which IAR have based their decision comes from over 800 studies, which have tended to show that people who eat more meat have slightly higher incidences of cancer, especially colorectal cancer. However, these epidemiological studies cannot always rule out other confounding factors, as diet and lifestyle are very complicated. We also don’t know how meat and processed meat could increase cancer risk, there are a number of possible mechanisms for this but none have definitely provided a mechanism for how meat, processed meat or compounds contained in it can trigger cancer.

Meat consumption probably is one of many factors contributing to the high rates of bowel cancer seen in America, Western Europe and Australia, but the mechanism is poorly understood, and the effect is much smaller than, for example, that of cigarette smoking on the risk of lung cancer. It is also worth noting that there is little or no evidence that vegetarians in the UK have a lower risk of bowel cancer than meat-eaters.

The evidence does show a dose response, so that as the consumption of meat goes up, so does the cancer risk. So people who are in the highest category of meat consumption should think about reducing the amount of processed meat or red meat in their diet.