Permaculture SwalesIn Permaculture, a swale is a method used to harvest rain water.  They are long shallow trenches that run along the contour of the land.  This means that swales are perfectly level.  Swales do not direct water flow, but they collect water.  The soil removed from the swale is piled on the downhill side to make a slightly raised bank or berm.  When rain falls, the water runs along the surface of the topsoil, and it will collect in the depression of a swale.  The water will slowly seep into the soil and collect in underground pockets that will supply the roots of plants through weeks and even months without rain. 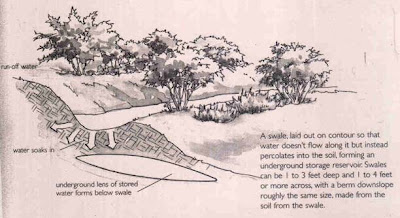 Illustration showing the water storage of a swale –

If rainfall is heavy or fast enough, the water will also slowly seep into, through, and maybe overflow the berm.  Since the swale and berm are level, the water gently slips over the edge, and no erosion takes place.  The water then travels downhill to the next swale.Plants are planted in the downhill berm.  The roots keep the berm in place, and the water provides moisture to the plants.  Water loving plants can be placed further into the depression of the swale, and plants that require less water can be placed further downhill of the berm.

As time goes on, rain and wind will continue to push and carry silt and other debris into the swale which will slowly build up a compost-like rich soil.  This will only continue to benefit the plants near the swale. 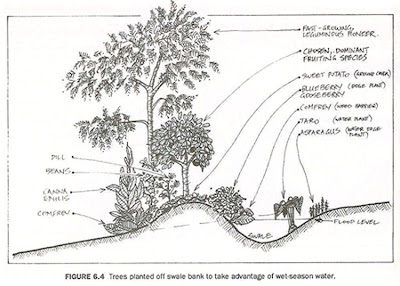 Swale design by Bill Mollison
Swales can be very large or very small.  They can cover large fields or small yards.  The key to making swales is keeping the swale level.  There are many techniques for doing this.  Two handmade leveling devices are an A-frame Level and a Bunyip (water level) which were both used by the Egyptians.  If you have the ability, you can also use a laser level or other surveyor’s tools. 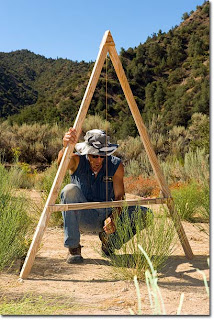 The ancient A-frame Level.
A great video on making a Bunyip (water level) 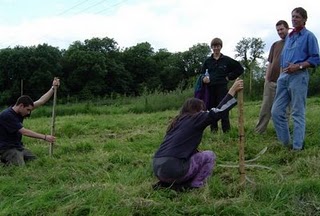 Using the Bunyip (water level).
When the reading is the same on both sides, then the base of one stick is on contour (is level to) the other stick.  Mark a line with chalk or paint or string from one stick to the other, and you have marked the contour of the land.
The distance between swales is really determined by rainfall.  Swales should be closer together in areas with high rainfall.  According to Toby Hemenway, author of Gaia’s Garden, they should be spaced 18 feet in areas with 40-50 inches of rain, and 50 feet in areas with 15 inches of rain.
The following images are of a larger swale system being built.  As you can see, the contour of the land typically creates a curved pattern across the land, NOT straight lines.  Rarely are there any straight lines in nature. 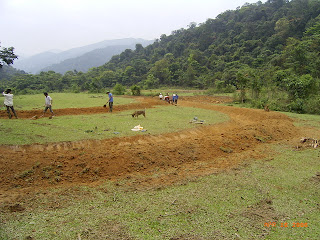 Larger swales following the contour of the land 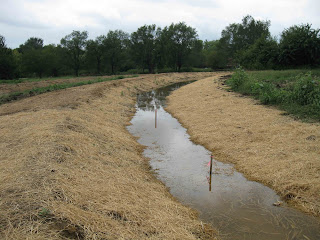 Water harvesting in the swale
Here is a smaller swale system being established in a display garden: 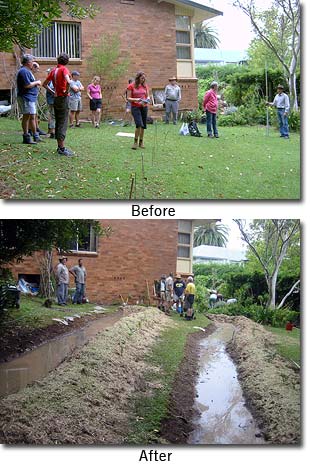 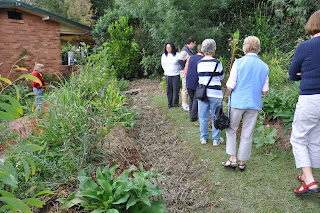 The planted swale system at a display garden.
Note that the depression of the swale in this photo has been packed with straw.  This allows a more formal appearance to a yard (instead of standing water) while still retaining the water harvesting and storage capabilities. 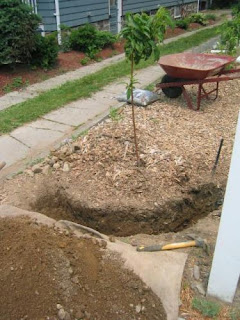 In even smaller settings, you can create a Fish-Scale Swale.
Note that this swale will be filled with straw mulch and then covered with a thin layer of topsoil.  No one but the designer and the plant know the swale is there. Perfect for those who don’t want a yard with “ripples” yet still want the benefit of the swale systems.
If you live in any area that does not receive regular rainfall and has weeks to months where no rain waters your plants, then I strongly suggest looking into Permaculture Swales.
Source