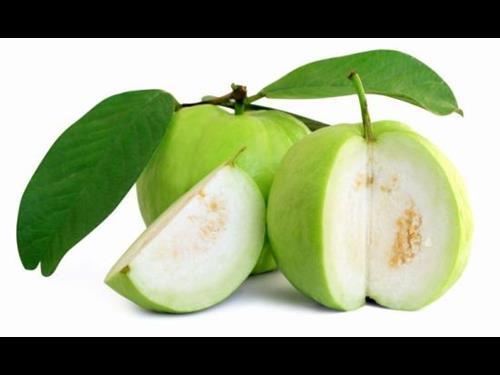 Guava (Psidium guajava L.) is an important horticultural fruit, belong to family Myrtacea, which contain about more than 80 genera and 300 species are dispersed throughout the world among different environments, mostly Australia, America and Asia (Nakasone and Paul, 1988). The family of guava is further sub divided into two sub families, one is Leptospermoidea (in which fruit is of capsular shape) and other is Myrttoideae (in which fruit is barriers or drupe) (Cronquist 1981, Wagner et al. 1990).

Guava can be grown on various type of soils with different soil textures, drainage property. There are many shapes of guava fruits like ovoid shape, round shape and pear shape. Average fruit weight is 100-400g and diameter is4-10cm (Mitra, 1997). Guava is basically classified as a berry fruit. Fruit of guava is consists of fleshy portion (Mesocarp) which is of different thickness, soft endocarp which contains many small size, yellowish-creamy seeds (Malo and Campbell, 1994; Marcelin et al., 1993).

Pulp of guava contains two types of cell-wall tissues; stone cells and parenchyma cells. Stone cells are high lignified woody type material which give a sandy or gritty sense when they are consumed, this characteristic of guava fruit make it resistant to enzymatic degradation. Mesocarp tissues account 74% of guava fruit, while parenchyma cells are present in endocarp dye to which they are soft in texture (Marcelin et al., 1993).

Color of upper skin of guava fruit is light green to yellow. Pulp color varies from white, pink, yellow or light red depending upon variety. Immature fruits are hard textured, astringent and acidic nature. Fruits are astringent due to high phenol content and low sugar content. When the fruit is ripe, its skin become soft, sweet, non-acidic (Malo and Campbell, 2004; Mitra, 1997). There are many cultivars of guava but they are broadly classified as white and pink guava. In many countries, seedless varieties are also available, which have potential to become popular (Yadava, 1996).

Guava is a good source of many important antioxidants and phytochemicals which includes ascorbic acid, a good amount of carotenoids, antioxidant dietary fiber content, and polyphenolics. It is considered that guava has second highest amount of ascorbic acid, which ranges from 60-1000 mg/100g, after acerola cherries (Mitra, 1997). Carotenoids have many beneficial effects on human health relating to their antioxidant properties. These are pigments which are red, yellow and orange in color (Wilberg and Reodriguez-Amaya, 1995). Pink color in guava flesh is due to lycopene, a major guava carotenoid (Mercadante et al., 1999). Guavas are considered as frost-free. It is because they can tolerate a wide range of climates and soil conditions (Menzel, 1995). Mostly guava is propagated through seeds. Honey bee is considered as a major source for pollination in guava trees (Yeshitela and Woldetsadik, 2003). The range of cross pollination is usually considered to be 25.7 to 41.3%. For attaining high yield and good quality fruit production, the choice of superior seedlings is considered to be essential and vegetative propagation maintained the properties of seedlings (Morton, 1987).

During ripening, lycopene production increases in pink guava. When lycopene accumulate the rate of respiration decreases (Thimann, 1980). During ripening, fiber contents also decreases12-2g/100g, which is hypothesized that it is closely related to certain enzymes activity (El-Zoghbi, 1994).

In Punjab, guava is grown in all districts because climatic conditions and soil is suitable for its cultivation. Pear shaped guava is produced in Larkana district, Sindh. In NWFP, the production of guava is 18570 tones and cultivated on an area of 1557 ha (Agricultural Statistics of Pakistan 2004 -2005).

*Department of Agronomy University College of Agriculture, University of Sargodha