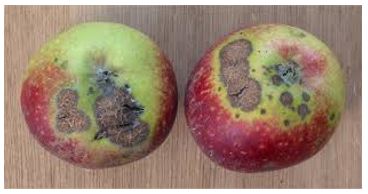 Apple scab is the most economically destructive disease of apples in the world, and it is the most destructive fungal disease affecting the home apple planting. It is most severe in regions that are cool, humid and rainy. If left untreated, it will cause green, brown, or black lesions on the leaves and corky areas on the fruit. It can defoliate susceptible varieties in mid-season, which will weaken trees, reduce yields, and blemish fruit so that they crack and split, making them fit only for cider. Very widespread and can occur wherever apples are grown.

Scab fungi overwinter in infected leaves that have fallen to the ground. During fall, the fugus form tiny fruiting bodies which are embedded in the leaves near the surface. Spores start to develop by later winter or early spring. The spores begin to mature at the time of bud break and continue to mature until blossom development. Spores are discharged into the air during periods of rain. The spores are then blown to nearby trees by wind currents, then germinate in a film of water on the surface of leaves and fruit. Infection is affected by the age of leaves and fruit; young tissues generally are most susceptible. Leaves are most susceptible 1 to 5 days after unfolding and become completely resistant from the time they finish expanding until shortly before leaf drop in the autumn. Fruit are highly susceptible until about 3 to 4 weeks after petal fall, but much longer wetting periods are required for infection to occur after this time. Precise requirements for infection of mature fruit are not known, but limited data indicate that wetting periods must last at least 48 hours for significant infection to occur immediately before harvest.

First signs of infection appear on sepals and undersides of early leaves as light grayish spots that turn to fuzzy olive green. The spots will then progress to a brown and metallic black color on leaves and fruit. Later, spots on the fruit will appear scabby and corky. Fruit may be cracked, deformed, or even russeted. Infected young fruit and leaves drop early, causing poor bud-fruit development for the following year. The disease spreads very quickly in cool, moist summer weather.

Control:
Spray Neem oil or sulfur based fungicides which need to be applied weekly and immediately after each rain. Start from the time the buds break and continue until 3 to 4 weeks after flower petals fall. If sprays are applied early in the season, you may avoid the need to spray later on in the season.

When spraying, make sure leaves and flowers are thoroughly covered and that fast expanding new leaves are protected with sprays.