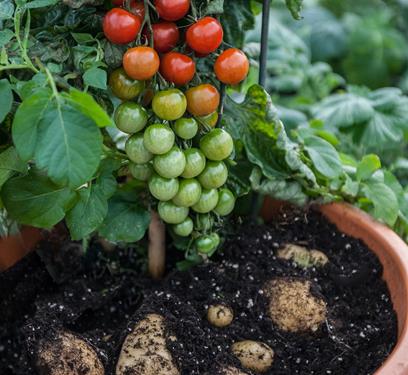 A plant that grows both tomatoes and potatoes? Meet the Ketchup ‘n’ Fries hybrid now for sale in the U.S.

It was developed in the Netherlands and commercialized in England, yet it’s as American as a plant can get. Ketchup ‘n’ Fries is a plant that’s been grafted to bear cherry tomatoes on top and white potatoes beneath the soil, and it’s making its way to home gardens in the United States.

The plant debuted in the U.S. recently, just in time to catch the attention of Southern California tomato enthusiasts, who typically are scouting now for new varieties to plant in the coming weeks. But as a chimera-like twofer, Ketchup ‘n’ Fries is garnering the attention of more than just tomato gardeners. 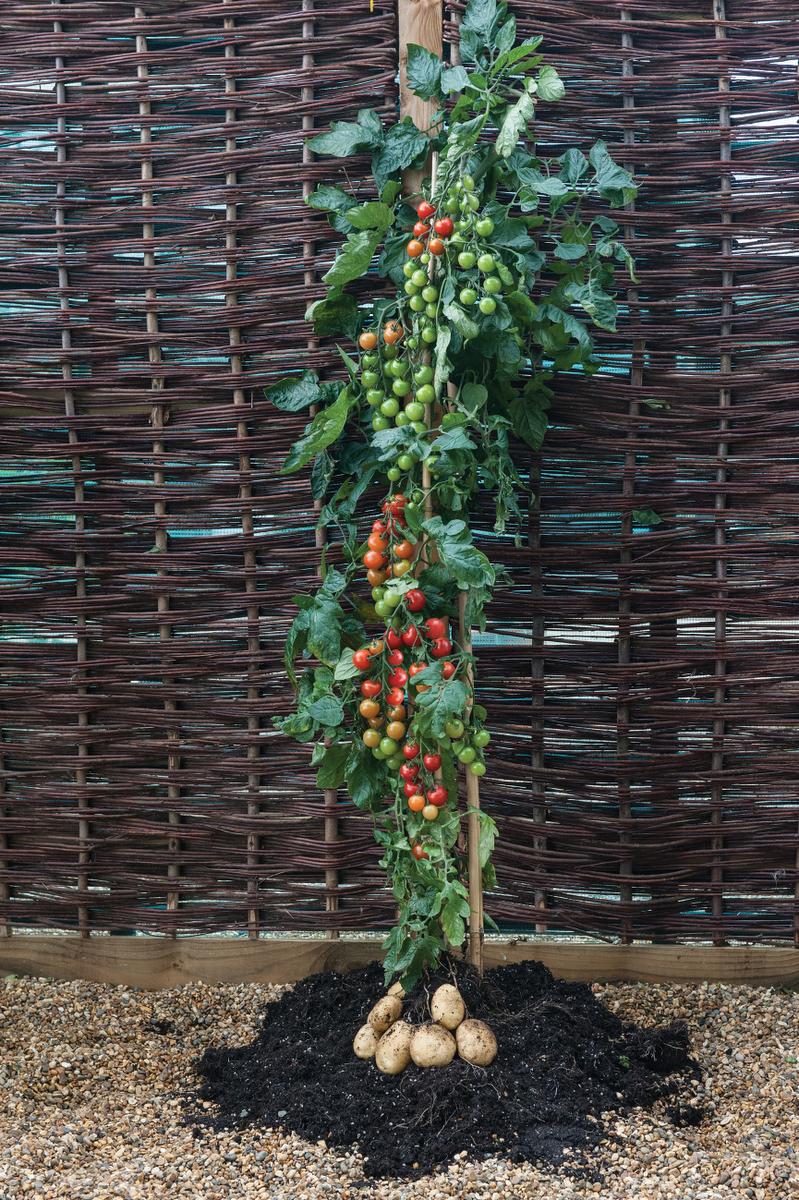 In fact, the idea of grafting them together goes back at least a century. Famous Santa Rosa horticulturist Luther Burbank is known for, among other things, grafting the tomato with the potato.

In his 1914 book, “Luther Burbank: His Methods and Discoveries and Their Practical Application,” he wrote about one of his findings: “With herbaceous plants like the potato and tomato, the stem may unite at any portion where the cut surfaces come in contact. To make a neat and thoroughly satisfactory graft, however, it is of course desirable to select stems of exactly the same size. The splice graft, elsewhere described, is the best one to use, and if the incisions are made with care, so that the incised surfaces fit accurately together, it is only necessary to tie a piece of cloth about the united stems for a few days until union has taken place. … With this method, I grafted the tops of young tomato plants on the main stalks of potato plants, at a time when the stems were about one-quarter of an inch in diameter.”

Many decades later, others have picked up where he planted an idea.

Gardeners have been able to successfully graft the two plants on an individual basis, but doing so on a massive scale wasn’t possible until recently. Various companies, including SuperNaturals Grafted Vegetables – a consortium of three American firms: GardenLife Inc., Log House Plants and Plug Connection Inc. – had been working on a commercially viable graft for many years.

“It is complicated,” said Alice Doyle, co-owner of Log House Plants. “There is a technique of doing it to make sure the combination is right so it produces more potatoes and more tomatoes … the science of it is pretty detailed. I looked at Luther Burbank’s book from 1914 and read about this under ‘interesting failures.’”

As Doyle and her collaborators John Bagnasco and Tim Wada toiled at their grafts, other companies were pursuing the same goal. In 2013, Beekenkamp Plants BV in Maasdijk, Netherlands, finally developed a commercially viable version. The plant was dubbed TomTato by Thompson & Morgan, a horticultural company in Ipswich, Britain, which began selling it in the U.K. last year.

“We thought, ‘Darn it, they scored,’” Doyle said. Rather than continuing to experiment to come up with their own version, SuperNaturals Grafted Vegetables chose another path.

The three partners decided to obtain the U.S. license for TomTato from Thompson & Morgan. They agreed to sell the plant under a more catchy American moniker, Ketchup ‘n’ Fries, a name for which Bagnasco had the foresight to have already secured the rights.

There are high expectations for this plant, given all the media attention and hype. Grown under the right conditions, it has the potential to produce about 5 pounds of white potatoes and 500 cherry tomatoes. These tomatoes are supposedly sweeter than Sun Gold tomatoes, which generally are known as the sweetest cherry tomatoes.

Already, Ketchup ‘n’ Fries is selling briskly. “This year, the most we can produce is 70,000 plants and we’ve already sold out for the year,” said Bagnasco, whose company sells to growers, who then sell to retailers. The plant can be ordered from Garden America and Territorial Seed Co. and will be available in select nurseries in Orange County in April.

Burbank once predicted that “someone will take up the experiment in future and develop a fruit comparable to my pomato that will have commercial value.”

A century later, the horticultural world would prove him right.