Food security is in actual much more than just food production, distribution and consumption. Since our origin Food is the top most priority of everybody. It gives us energy to grow and live stronger. The World Food Summit of 1996 defined food security as prevailing “when all people at all times have access to sufficient, safe, nutritious food to maintain a healthy and active life”. Generally, the conception of food security is defined as comprising together physical and economic access to food.

“The World Bank reports that global food prices rose 83% over the last three years and the FAO cites a 45% increase in their world food price index during just the past nine months. As of March 2008, average world wheat prices were 130% above their level a year earlier, soy prices were 87% higher, rice had climbed 74%, and maize was up 31%.

In case of Pakistan, it is an agricultural country and self-reliant in producing major crops for its population. The food crunch comes hand in hand with an energy crisis and in vague political environment along with the extremist pressures. Reports suggest that more than 90 million people in Pakistan are food insecure and the number may increase in the coming years. According to the 2010 agricultural census carried out by the Pakistan Bureau of Statistics, almost 64 percent of the country’s population lives in rural areas and earns a living from agricultural activities such as crop cultivation, livestock rearing, and transportation of agricultural products to market. The problem of food crisis has led many to believe that issues of food security are not merely food production issues but food availability issues as well. At present, half of Pakistan’s population is food insecure and if the existing trend of water reduction continues than it is obvious that food production and farming income will suffer.

Food security is now become alarming. If available food is not in the socio-economic access of common masses it cannot make a society food secure. There are a number of factors that limit the access to food for millions of poor people in Pakistan. The taste, aroma and the culture of food has been greatly affected by the modern agricultural technologies. New food varieties with increased use of chemical fertilizers and pesticides have had a severe health impact directly and indirectly. Direct health impacts involve consumption of contaminated food and water with chemical pesticides & fertilizers whereas climate change; environmental degradation; annihilation of local variety of food; uncultivated food and loss of biodiversity are the indirect health impacts. Other issues that contribute to ongoing food insecurity in the country includes growing population, cash crops replacing food crops, degradation of  ecology, politics in food.  Poverty makes it very difficult for people to grow their own food and also to buy enough food. Due to the low-income levels in many areas, it is also not possible for people to grow their own food or invest money in agriculture. With an increase in human population, the demand for alternative fuel sources, such as biofuels also increases.  In recent years, this demand of biofuel has led to large amounts of corn being used to create biofuels, thus reducing the amount of corn available to feed people. Land related problems like soil fertility depletion, water logging, soil erosion and salinity are badly reducing our food crops production capacity. Some illiterate and inexpert farmers use low quality seeds that reduces the productions.

The shattering floods in Pakistan, which have killed around 2500 and displaced nearly 20 million, have also adversely wedged the food supply chains. Nearly 18 million acres of cultivated cropland has been lost to floods while the loss of livestock could also be in millions.

Energy crisis in our country is also contributing greatly in food insecurity .Similarly unemployment reduces earning and in turn affects the purchasing power of the people thus leading to food insecurity.

The situation requires a revolutionary change where individual hunger be perceived as an issue of justice and not of charity. Thus to combat food insecurity we should provide aid and relief to people or countries that are suffering. We should develop new varieties that are better adapted to the changing climate through sustained investments in agricultural research. National Food Security Strategy (NFSS) should be marked out to discourse the issues of food insecurity in Pakistan. Continuous education for farmers should be initiated through exchange programs, mass media and short courses. The effective and efficient use of irrigation water is most acute to the future of Pakistan thus there is a need to make sustainable strategies for the conservation and efficient use of water. It is also essential that the government should plan for the future needs, taking into account domestic, industrial and agricultural demands of the future and influence on the environment. Good governance is essential to ensure that food is accessible to the people.
Local-level attempts to create sustainable rural livelihoods and to empower people will be important for future success. The government should introduce water- efficient seed varieties in water-stressed areas and should train farmers on using modern irrigation techniques to save the scarce resources. Another method to combat food insecurity is to use advance technology to produce more food. New advances in genetics have also made it possible to produce more food by creating varieties of plants that have higher yields. There has also been an increase in the technology and fish and livestock farming techniques. Proper use of organic and inorganic fertilizers is also perilous for maintaining soil fertility to enhance agriculture productivity. Fertilizers should be used according to the site-specific requirements of crops.

Pakistan is challenged with critical crisis of economy, governance and security to achieve long-term development. The government of Pakistan must deal with this issue on war footing. People cannot divert their energies and loyalties towards the country unless the government pay serious attention towards their hunger issue.

It is time that the government of Pakistan should take steps to strengthen livelihood, resources and activities of its nation. The international community should start investing in developing the social and human capital of the recurrently food insecure people. A series of improvements in governance are required to unleash Pakistan’s growth potential. Food Security in an otherwise food self-reliant country calls for steps to make Pakistan a fully food secure country. Pakistan can be turned into a food secure country if the government makes it the top priority. 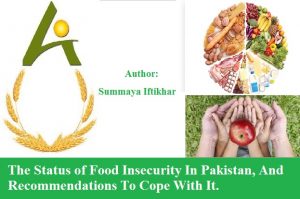