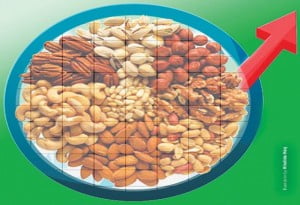 THE improved production of dry fruits and more aggressive marketing this year are sure to boost their exports, say officials and market players.

Forex earnings from dry fruits (including dry dates and dried apricots) totalled around $45m in FY15, up over 10pc from a year ago, and are expected to rise to $50m during this fiscal.

The export volume had touched 100,000 tonnes in the last fiscal year after staying depressed since 2008.

Total output of all dried fruits is expected to touch 600,000 tonnes this year, after remaining below or around 500,000 tonnes for the past few years, say officials of the Ministry of National Food Security and Research.

Market inquiries reveal that exporters have been marketing dry fruits in foreign markets quite aggressively for the last few years, taking advantage of web portals and expanding their supply networks.

Market inquiries reveal that exporters have been marketing dry fruits in foreign markets quite aggressively for the last few years, taking advantage of web portals and expanding their

The bulk of the country’s dry fruits output comes from Khyber Pakhtunkhwa, Azad Jammu Kashmir, Balochistan and the northern areas. Production in parts of these regions had remained affected and the supply-chain broken for years owing to the rise of militancy and extremism. But the security situation has now improved, impacting positively on the supply chain, output levels and exports.

“Another reason for the higher export is that we are also capturing part of [the global dry fruit] markets that were once served by Afghan exporters, who are now either focusing more on their domestic market or at times facing supply shortages or fail to compete with us in internet marketing,” says Muhammad Iqbal, a Karachi-based exporter.

The exports of dry fruits have risen over time in traditional markets such as the Middle East and the country has made inroads into new markets like Far Eastern and African countries, say exporters.

Meanwhile, exports to the traditional Indian market have remained stable despite issues in trade via the land route, as many sellers now cater to their Indian buyers via Dubai.

And demand for Pakistani dry fruits has also surged in Bangladesh and Sri Lanka. While Iran and Afghanistan produce a lot of dry fruits, Pakistani almonds, walnuts, pistachio and raisins are also exported to the two countries.

“In the European market, our exporters are competing well with their Indian counterparts by reaching out to large networks of chain stores and taking advantage of the ban on Iranian exports during the last few years,” a senior TDAP official told this writer.

The production of some major dry fruits, like almonds, pistachio, apricot (which is processed to make dried apricots), walnuts and figs has gone up in the last three years after witnessing a declining trend earlier.

But whereas increased output has helped exporters earn more foreign exchange, supply for local market consumption has remained lower than the demand, which is why local prices remain high, traders at Jodia Bazar say.

Since 10pc or more of all apricots are dried up, the availability of dried apricots is estimated to be around 24,000-25,000 tonnes, they add.

Meanwhile, the fancy packaging of dry fruits, both for local and foreign markets, has also helped improve earnings.

“Gone are the days when we used to ship almonds and other dry fruits in 5-10kg bags at low prices. Now, dry fruits are dispatched in cardboard and plastic crates that contain smaller boxes and containers neatly packed with 0.5-1kg bags of a particular fruit and get much higher value,” says a Karachi-based exporter.

“Perhaps the only exceptions are dry dates and peanuts, which are still being exported in large bags.”

This fancy packaging can also be seen in most domestic superstores, bakeries and dedicated shops selling dry fruits, where one can easily find 100-500gm packets. The sellers get a high profit margin on sales of such packets.

Pistachio is available at Jodia Bazar at Rs2,400 per kg for retail buyers. But a 100gm packet of pistachio is selling for Rs350-400, depending upon the size and location of the shop.