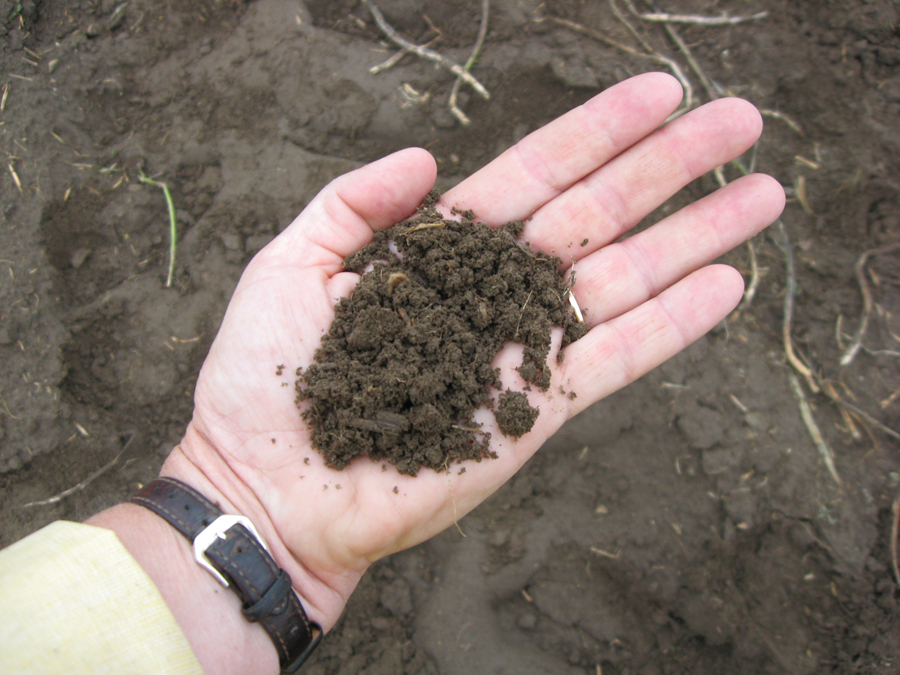 The genesis of soil structure refers to the causes and methods of formation of the structural units or aggregates. Soil structure is a result of the processes of flocculation and granulation. Flocculation is the aggregation of individual particles into small clumps or clusters. Granulation is the cementation of aggregates into masses. These processes are influenced by many factors.

a. Alternate wetting and drying of the soil. Alternate wetting and drying of the soil causes shrinkage and swelling which develop unequal strains and stresses resulting in cracking and split ting. The extent and type of this action depend on the amount of clay and the type of adsorbed cations. High clay and adsorbed Na will give a coarse pattern due to swelling of clay on rcwetting. On the other hand, low clay and adsorbed Ca will produce a finer-grained pattern.

b. Physical effects of roots. Plant roots and root hairs produce lines of weakness in clods or the soil mass as they penetrate into the soil. The clods or soil mass break into granules along these lines. Developing roots exert prcssure on these granules and induce aggregation. Root secretions flocculate the colloids, and stabilize or cement the aggregates. The use of moisture
by growing roots also causes dehydration of colloids, which results in shrinkage and finally in cementation. Organic acids produced from the decay of roots work as a cementing agent for aggregation.’

c. Type of decaying organic matter and microorganism activity. Desirable types of structural units, particularly crumbs, are formedn topsoil with high biological activity. The mineral particles are held together by forces of adhesion and by fungal hyphae and bacterial colonies. Microorganisms excrete mucilage which is a sticky material. This sticky material binds the soil particles together into aggregates. Good crumb structure is characterized
by a high content of clay-humus complex.

d. Effect of adsorbed cations. Hydrated Na + ions have a large radius and separate (i.e. disperse) soil particles, while unhydratcd ions of Ca2+ cause flocculation of soil particles. Reduction of the hydration shells of colloids by substitution of less-hydrated ions (Fe3+ > A13+ > Ca3+ > Mg2+and PO SO<) causes attraction between lli.rtce.s 'n'j 'Ian Get ~uus forces to become effective.

e. Type of parent material. Soils developing from sandstone win be sandy and win have single-grain or massive structure, while those formed from shale will be clayey and may develop platy, prismatic, or columnarstructure because of their higher clay content.

f. Alternate freezing and thawing. During freezing, expansion of water acts to break up both massive soils and peds and fragments. This effect is further enhanced by the growth of ice crystals. These crystals serve as growth centers to which water is drawn from around the particles. This process causes dehydration of the particles, which makes possible more contact
between the soil particles. On the other hand, when a frozen layer of topsoil thaws, clay may be dispersed into isolated particles. This thawing effect of a frozen layer usually causes soil erosion due to dispersion of clay. More desirable structure usually develops after several freezing and thawing cycles have occurred.

g. Effect of CaC03• Crumb formation is also promoted by CaC03.When Ca(HC03h in solution precipitatesin the form of CaCOj it diffuses through porous crumbs. When thus precipitated it serves as a cementing and coating agent, thus stabilizing the crumb.