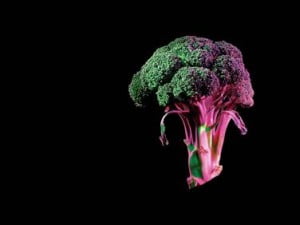 This past winter, as near-record snows piled up outside his 30,000-square-foot warehouse off Lake Michigan, Robert Colangelo stood inside, bathed in blue and red LEDs, and surrounded by crops of butter lettuce and herbs.

Located 40 miles outside Chicago, this is Green Sense Farms, the largest indoor vertical farm in the U.S. The CEO of Green Sense, Colangelo grows produce—including micro-greens and basil—hydroponically, feeding them a constant stream of nutrient-rich water, in racks 25 feet high, beneath specialized LEDs, monitored by computer, and harvested as often as twice a week. “We can grow a large volume, in a small footprint, 365 days a year,” says Colangelo. “We’re not subject to rain or drought. We control the environment. So the weather is perfect every single day.”

Indoor vertical farming has become a major player in the niche market of locally grown, high margin, perishable greens—such as kale, watercress, and lettuces. It eliminates the need for pesticides. It reduces the spoilage that occurs from trucking perishable produce 3,000 miles across the continent. It significantly cuts the carbon footprint of farm tractors and refrigerated trucks. And it meets the growing demand for fresh produce among middle-class urban dwellers.

Many say it could help avert a looming global food crisis and one day become the future of agriculture. The United Nations predicts that the global population will swell by 2.4 billion people by the middle of this century, and 66 percent of the planet will live in cities. That presents a challenge to feeding everyone. With an increasing demand on the world’s arable land, and droughts and floods predicted to more frequently devastate crops—driving food prices higher—one solution is to grow food, in cities, where it’s needed.

Technologists and green-thinking entrepreneurs have already spent hundreds of millions of dollars raising indoor vertical crops across the globe. In eastern Japan, in a former Sony semiconductor factory, one plant scientist harvests 10,000 heads of lettuce a day. In New Jersey, a former Cornell University agriculture professor, with backing from Goldman Sachs and others, is helping to turn a run-down steel factory into a 69,000-square-foot farm. It will be capable of turning out 2 million pounds of produce annually, eclipsing Colangelo’s farm when it opens this winter.The new farm will use 95 percent less water than a field farm, and like others offer more productivity per square acre, and save energy costs such as tractor fuel.

“We’re not subject to rain or drought. We control the environment. So the weather is perfect every single day.”

At Green Sense, Colangelo partnered with electronics giant Philips, which created a unique spectrum of blue and red light—the optimal light for photosynthesis in leafy greens—in the 9,000 LEDs he uses. When plants sit directly beneath such specially tuned LEDs, they don’t spend energy growing upward. They grow outward in dense leaves, which optimizes nutrient density and means less growing time. “We can turn a micro-green crop roughly every 12 days, baby greens about every 30 days, and lettuces about every 35 days,” Colangelo says. Field farmers get one or two chances a season to turn crops.

Colangelo sells his Green Sense branded produce to Whole Foods Market, which stocks it in 48 stores in eight states. “The stores get it fresh, and for the customer, it’s better quality,” Colangelo says.

He is also looking into new ways to improve his operation. He recently partnered with a genomic sequencing lab in Shenzhen, China, to identify seeds that best respond to LED lights. “You can create hybrid seeds, and then you can naturally crossbreed them with other plants so they double your crop yield,” he says. “They’ll be like non-GMO superseeds.”