The number of plant required per unit area to achieve the highest yield will depend on the nature of the crop and its environment. This number cannot be too small, nor can be too large. Maximum exploitation of the factor needed for growth is achieved only when plant population exercises maximum pressure on all the production factors. As a result, the individual plants are under relatively severe stress because of inter-plant competition.

The relationship of grain yield to population is different.

As plant density increases to a maximum which remains constant within certain population range.

Then decline more or less steeply as population increases, even when moisture and nutrients are not limiting.

The basic principle is that the optimum density of crop should be lower than normal under conditions of limited moisture supply.

At highest levels of nutrients supply, more plants per unit area are required to produce maximum yield. As plant density increases up to a certain limits a crop will continue to respond to higher level of added nutrients provided moisture supply is adequate. At low levels of nutrient supply, dense population have adverse effects on crop yield.

With increase in crop density, the height of plant increases instead of lateral spreads.

Crop stems are thinner, and due to more height crop is more subjected to lodging.

In every dense crop, there is competition among plants results in mortality of some plants.

The plant population is according to the availability of moisture and nutrients. The number of plants cannot be too small, nor can it be too large. 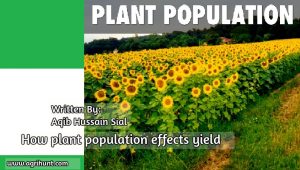