How it is dangerous to crop plant?

Weed plant, either it is beneficial for consumption, but if it is growing in a major crop field considered as the weed. And it is dangerous to plant health ad causes the reduction in yield about 45-50 % because weed plant competes with the crop plant for the sake of:

Basically, the direct competition of weed to crop plant is for the sake of water, nutrient and light etc. 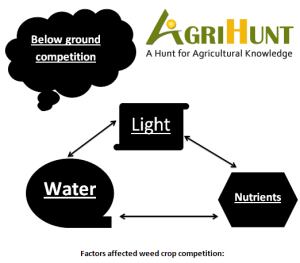 There are several factors which affect the weed crop competition:

The emergence of weed crop is major factor which affect the crop yield. If the crop plant emerge first, then it will enjoy the better resources available as light, space, nutrient, water etc. After it when weed plant will emerge, that will weak due to less source utilization power, at that time the crop plant will be more tolerant. The weed crop competition is mostly during the early stage.

If the crop plant grow first then it will dominate over the weed plant. The rapid growth of a crop plant helps to reduce the weeds emergence.

The extent amount of weed plants in a field causes the loss in yield. The amount of cop plant if higher than the weed plant will be less due to unavailability of space.

Duration of crop plant is as important as other factors. If the weeds plants exits for a long period of time in a field then it ultimately reduces the crop yield. The weed control should do early after its emergence.