Air pollution (also called smog) is a mixture of solid particles and gases in the air. Car and factory emissions, dust, pollen and mold spores suspend in air and act as air pollutants.Air pollutants are of two types: Primary and secondary.

Common effects of air pollution include Respiratory and heart problems, Global warming, Acid Rain, Eutrophication, Effects on Wildlife, and Depletion of Ozone layer. Every pollutant contributes in air pollution has its own specific effects which are described below.

Human beings chronically exposed to SO2 have higher incidence of cough, shortness of breath, bronchitis, colds of long duration and fatigue. Most of the SO2 in the atmosphere is converted to sulfate salts, which are removed by sedimentation or by washout along with precipitation thereby making rain water acidic due to Sulfuric acid formation.

The oxides of nitrogen are toxic gases which enter the human body during breathing. High concentration of NO2 may increase susceptibility to respiratory pathogens and also increases risk of acute respiratory diseases like bronchitis, chronic fibrosis, emphysema and bronchopneumonia. N02 exposure can cause decrement in lung functions.

The particles may influence the human body on setting and cause external effects e.g., effects on skin. However, certain groups of particles pass into the blood stream on being inhaled and act as systematic poison. The effect of irritant particles in respiratory tract depends upon the size of the particles, their solubility, penetration deposition and clearance mechanism in human respiratory tract.

Carbon monoxide is absorbed from the lung tissue in blood stream. Competitive bending between carbon monoxide and oxygen to haemoglobin (Hb) in red blood cells (RBC) then occur forming carboxyhaemoglobin (COHb) and oxyhaemoglobin (O2Hb) respectively. CO level to about 5% may cause cardiovascular effect in young healthy, non- smoking individuals leading to fatigue and reduced ability to work.

These compounds react with oxides of nitrogen in the presence of sun light and give rise to photochemical smog. This smog is a dense haze which restricts visibility. Hazy fumes cause irritation to eyes and lungs and damage plant life.

Lead affects virtually every system in the body. It can damage the kidneys, the nervous system, the reproductive system and cause high blood pressure. It affects the development of brain of fetus and young children. Children exposed to lead show lack of intelligence, behavioral problems and decreased ability to concentrate.During lactation, lead crosses placenta and is detected in breast milk. This is the major source of lead to infants which causes neurological problems in the developing child.

In order to save environment from air pollutants, every country has their own standards as well as United States Environmental Protection Agency (US-EPA) and WHO standards. 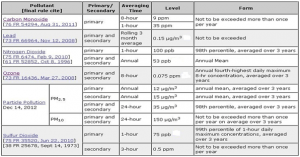 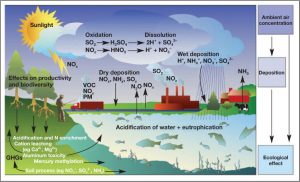