Agriculture is an important sector of Pakistan economy. It employees 52% of the labor force and accounts for 26% of gross domestic product (GDP).  Agriculture contributes 70% of export earnings. Due to expansion in population at annual rate of 3% and utilization of land and water resources the pressure on agriculture is increasing tremendously. Nations will enter the 21st century on the wings of technologies. In the absence of skilled and talented personal a country like Pakistan can only maintain its survival with the most dynamic, efficient and energetic personals.

Pakistan is a developing country where the production of agricultural commodities is very low. For the development and prosperity of Pakistan, it is the dire need of day to enhance agricultural production many-fold to the cope with the challenge of the ever increasing demand for food and fiber. In addition to several allied agencies, which are rendering services for the development of agriculture, the department of agricultural extension plays a crucial role in the development of this sector not only by disseminating recommended technology among the farming community, but also by bringing back the farmers problems to the researchers. In this way it keeps research scientists in contact with the practical problems being faced by the farmers.

The director general of agriculture extension is assisted by five subject matter specialists at the head quarter and five deputy director of agriculture posted at the divisional level for field works. In addition, D.G. also controls the FATA the barani agriculture institutes though their respective head. At districts and sub districts level the extra assistant director of agriculture who are administratively controlled by the deputy director. EADS is assisted by the agricultural officers and field assistants at tehsil and sub tehsil and union council’s levels respectively. The director general plans, directs and supervises all extension activities, campaigns and projects in the province.

The director general extension performs the following main duties in the province, to develop extension organization to meet the changing needs of modern time:

He will co-ordinate all extension activities of governments/semi governments institutions (ZTBL and other commercial banks) regarding agricultural production in the province.

Co-ordination committees will be established at provincial, divisional and district level in order to improve linkage between the various sub-sectors within the department.

Collaboration with relevant authorities and private sector in the promotion of new developments of farm machinery, technologies and in agricultural machinery census.

He formulates adequate plans for the staff recruitment and effective personal management.

He is responsible for making policy and this is one duty that can’t be delegated to sub-officers.

He plans and makes extension organization enough to the farm people reflecting and needs of local people.

He has to evaluate the effectives of his organization and the value of its programme to the public continuously and objectively.

He delegates most of his duties/responsibilities to other sub-ordinate officers particularly the Directors to other sub-ordinate officers particularly the Director and Deputy Director at the Headquarter and divisional level and extra assistant at the districts/agency level but at the same time he is responsible for sound administration. He is assisted by group of specialists at the Directorate of Agriculture extension in the discharge of his multifarious functions.

Administratively, the district is controlled by the DOA. He is the in charge of the department at district/sub-district level, and is responsible for the supervision of the activities of the Agricultural Officers and Field Assistants working in his jurisdiction. He supervises all the development projects, demonstration farms and nursery farms in his area. He is assisted by one Assistant Plant Protection Officer at the district office in the discharge of his functions.

He is graduate (B.SC (Hons.) or M.SC (Hons.) in Agricultural with training in public administration and agriculture and with a sufficient experience on the job. The Director of Agriculture is assisted administratively by the deputy directors, who are the administrator of the department at divisional level. Deputy Directors are assisted by Agricultural Officers/EADA) for performing their duties in extension services.

Each Deputy Director is assisted by an administrative officer and some subject matter specialist at divisional level.

He is a graduate of (B.SC (Hons) or M.SC (Hons) in Agriculture. He controls tehsil and sub-tehsil having 3-4 union councils. He performs extension functions with the help of Field Assistant, Budders and Beldars.

He is the pivot of agricultural extension activities in the Union Council. He is usually qualified iploma holder from Agricultural Training Institute, where he gets two years training after matriculation. He performs the following functions: To layout demonstration plot to keep the record of methods and result demonstration. To layout orchards in the villages. To help the farm people in obtaining the improved seeds. To protect crops, vegetables, and orchards from pests and diseases by advising field sprays. To educate the farm communities to adopt the recommended seeds, fertilizer, pesticides etc. To survey acreage and yield estimation under each crop in each season. 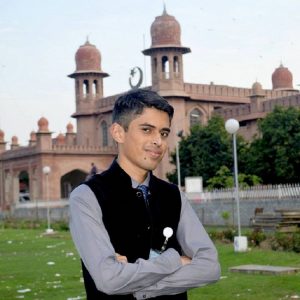 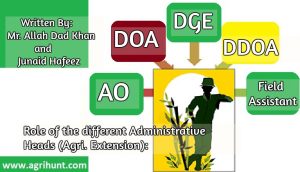