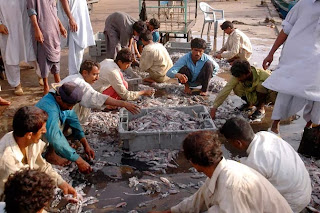 Karachi Fish Harbour Authority (KFHA) has set a 15-day registration deadline for all open sea fishing vessels in a move to implement the Supreme Court orders on Karachi unrest suo motu case. The decision came during a meeting, which held at Customs House a day earlier to bar all unregistered vessels from fishing after deadline expires, officials of KFHA told Business Recorder on Wednesday.

“The move is to comply with the Supreme Court orders on Karachi unrest suo motu case after missing containers of weapons surfaced. Now all boats have to get registered with KFHA before sailing to open seas for fishing,” they said.

The registration move is about improving security at the country’s seas, they said, adding that “there is a huge number of small boats voyaging through seas from fish harbour without official registration,” they said.

Officials said the move is primarily for brining the small boats into registration and documentation net of the authority which are largely moving on seas unchecked. “The KFHA intends to have a close check on small boats in particular to avoid casualties or security breach on seas. It will also help the authority to locate the troubled boats on seas,” they said.

Until now, they said the small boats were avoiding getting them registered with the authority which made tracking their whereabouts on open sea difficult. “The move will also help the authority and other official departments to reduce illegal activities on the seas,” they said.

After the deadline passage, they said the authority will let no unregistered boats sail for fishing. To a question, they said the move will not reduce landing of seafood catch rather will help improve a little of the authority’s revenue through registration fee. “Not much revenue is expected through registration fee but it will, however, give a little increase to annual collection of the authority,” they said, adding that the move is largely aimed at initiating a step to comply with the Supreme Court directions.

They said the KFHA issued a notification KFHA/427/2013 on November 5, directing all boat owners to comply with the authority’s orders to get their boats registered within the deadline period of 15 days and warned them against sailing restrictions.